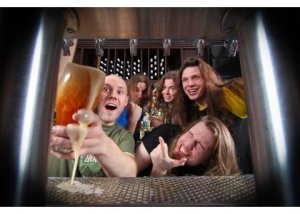 This week on Third Eye Cinema: our “summer of metal” continues with Dan Cleary of Canadian traditional metal band Striker!

From their inception in 2007 to date, they’ve been carrying the torch of classic 80’s style metal, delivering a surprising mix of old school styles from British heavy rock and NWOBHM to Los Angeles glam to head splitting speed, all tied up in one melodic, chameleonlike package!

With a focus on the sublime pleasures of beer and the ability to tap into such disparate influences as Grim Reaper, Dokken and Agent Steel, this is going to be a band to watch for fans of traditional metal!

Pour yourself a cold one and join us as we talk barre chords and barstools with Dan Cleary of Striker, only here on Third Eye Cinema!

For more on Dan and Striker, check out the official FB page