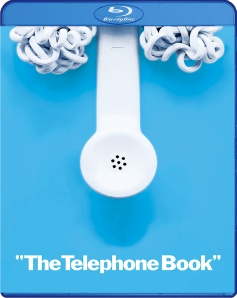 Third Eye regulars should know by now that I’m a huge fan of startup restoration label Vinegar Syndrome.  Even the least of their efforts thus far has proved more than worthy of attention and praise.  But into every life, a little rain must fall.

And so we come to Nelson Lyon’s The Telephone Book (1971), described as “a major, though forgotten, work from New York’s underground film scene”, but falling well outside the confines of what Third Eye readers (and Vinegar Syndrome devotees) have come to expect.  Take a deep breath, and fasten your seatbelts – it’s sure to be a bumpy ride.

Lyon’s main claim to fame was as a writer during the 1981-2 season of Saturday Night Live, and if that doesn’t already make you walk away from this one with due rapidity, just hang in there. 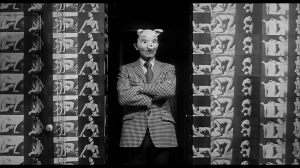 So let’s take this as I did, and start with the special features.  There are no real extras to speak of – you get a commentary track with the producer and two versions of the trailer.  The original trailer, for The Telephone Book, is more subdued, all in b/w and featuring our leading lady (who we’ll get to in a moment) pulling off a blindfold/eye mask to some extremely cheesy narration “If I wanted to…I could seduce the President of the United States”.  Sure, buddy.  Didn’t do a thing for me…

The reissue trailer, for its retitling as Hot Number, is more early 70’s hippie style, with parts of the original trailer bolstered by scenes from the film and, like the film itself, ending on a whole lot of sleazy “dirty cartoons”, the ridiculous counterculture curio that stemmed from underground newspapers and “comix” featuring the likes of Cheech Wizard and R. Crumb and moved into the earlier efforts of Ralph Bakshi (like his original claim to fame, Fritz the Cat).

Those unfamiliar with the style can check out early episodes of The Electric Company or the Sonny and Cher Comedy Hour – those weird Schoolhouse Rock type animations with squat guys with giant Ziggy heads and noses and stars with trails flying at you?  Put genitalia on them and inject a puerile juvenile
imagination, and there you have it.  Ooh, yeah, ‘hot number’ alright.  I’m sure your girlfriends will prove their hipness by getting hot to THAT, you betcha.

To a still of courthouse rooftop statuary (a Michaelangeloesque male angel holding lightning bolts in one hand), we are treated to a few seconds of exaggerated, sped up “heavy breathing”, before some extremely generic credits roll (one wonders if they were created especially for this release). 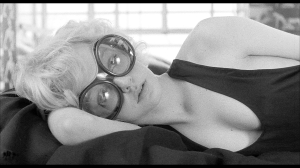 After seeing a few notable cast members amid the unknowns (Warhol regular Ultra Violet?  Jill Clayburgh?!?) and listening to a scratchy old early 30’s record, the film finally begins, with Goldie Hawnesque Alice (TV bit player Sarah Kennedy) bedecked in some truly ridiculous 60’s racing goggles staring at a wall full of exposures of dirty photos.  She stands on her head and does some leg scissors, then hides in a corner, giving us a foreground view of a bed whose covers consist of the American flag, as a voiceover of a preacher (apparently a phone recording of “Dial-a-Prayer”) plays.  Yep, we’re in 60’s art film territory.

Cut to a closeup of a man reciting the world’s most ridiculous filthy phone call:

“Hello there.  I’d like to talk to you, very seriously for a moment, about your beautiful tits.   Then I wanna take my toes and put them right in your…then you hold your nose between thumb and forefinger, and put your head right in your…now, while your right hand is in the previously described area, take a nice big chocolate sundae, with a lot of, you know, crunchy cashew nuts, and lots of whipped cream, and smear the entire thing all over your…”

Switch again to some fat drunken businessman (James Harder), somewhere along the lines of 30’s character actor regular Pat Patterson, who has the utter chutzpah to refer to himself as “eat(ing) well”, and who describes sticking his hand into hot peasoup as preparation to make obscene phonecalls to nuns (!), before devolving into describing the re-emergence of Atlantis and the coming of little green men.  Ho ho, we have a real rip snorter skewering the bourgeoise here.  Stick it to the man!

Scene change.  Some guy in a trenchcoat and fedora gets off the bus and onto the subway.  Cut again, to our blonde bimbo friend from the beginning, who tells a friend (Jill Clayburgh of Silver Streak, who spends the entire film hidden behind an eye mask, which I can’t blame her for) – by phone of course – how a filthy call she got was “like a work of art”.

We get a scene from Kennedy’s point of view, where she’s on one of those aforementioned telephonic discussions – the pervert’s side of the call represented by subtitles, ala a then-trendy Bergman film.  She wants to meet the creepy caller (Norman Rose of cult soap opera/crime show The Edge of Night), who self identifies as “John Smith” and tells her helpfully that he’s “in Manhattan…in the phone book”.  So she actually starts calling her way through the phone book!  Eventually she meets him, sporting a paper mache pig mask and a whole lot of facial blemishes, as he describes his devolution from astronaut to filthy prank caller…don’t ask me. 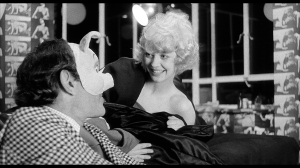 Another scene change, to some lisping guy in sideburns (Warhol Factory regular Ondine), who looks a hell of a lot like Herb from WKRP (or Jack H. Harris’ Equinox, for that matter), and who has a naked man lying face down on the desk in front of him.  As he continues to chat with the viewer, he smacks and grabs his boy toy’s hairless butt.

Switch again, to some skinny old man in Groucho Marx gag glasses (you know, the ones with the eyebrows and nose attached?), black socks and terrible jockey shorts, humping away mechanically atop some girl with an unfortunate grooming faux pas – yes, she’s a (very) early adopter of the Brazilian racing strip.  Come on, this is the mid 60’s…who the hell did THAT?

This is Har Poon (Barry Morse, Prof. Bergman of Space 1999 and Funeral Home costar), a would be arthouse director (from “Wholesome Films”, yet!), whose bare studio is brimming with naked ladies and even features one sporting a leather bra and whip (yep, you guessed it, it’s Ultra Violet, who displays her ability to touch her chin with her tongue).

Dirty feet, sped up Benny Hill style shenanigans (complete with Woody Allenesque Dixieland jazz accompaniment)…holy shit, it’s one of those stupid unfunny hippie sex “comedies” like Something Weird’s Deep Jaws and The Dicktator or Code Red’s Can I Do It…Till I Need Glasses?

Adolf Hitler’s voice chimes in the background.  Familiar character actor Roger C.Carmel (a long, long way from his recurring role as Harcourt Fenton Mudd in Star Trek) and his handlebar mustachio makes his debut in a subway flashing scene with a twist, before delivering an early take on the infamous When Harry Met Sally restaurant scene.  And we’re barely through the first third of the film, which just keeps going on…and on…and on…

Well, it’s an obscurity, alright.  Unfortunately, there are some obscurities that are deserving of their status…

I’m unsure as to why this film was chosen for Blu-ray restoration status.  While blacks are crisp for the most part, there’s sufficient grain to be noticeable to even the most casual of videophiles (again, nowhere near the atrocity of BFI’s restoration of Andy Milligan’s Nightbirds, but that’s an all time low mark for Blu-ray, with its golfball sized grain).  And further, we have the obvious conundrum of the film itself.

Neither funny nor sexy, aesthetic nor of any real value filmically – it’s hardly justifiable as a long lost entry in the filmography of a beloved sexploitation director ala Sarno, Findlay or Milligan, and the most you can say for it is that it features Ultra Violet, a few television bit players and an early appearance from respected mainstream 70’s actress Jill Clayburgh…but I noted that at the outset.  Seriously, that’s about it.

Once again, I must note that I strongly appreciate Vinegar Syndrome’s restoration and release of so many lost and obscure from the golden age of exploitation and sexploitation, in the 60’s and 70’s.  Their efforts have proved across the board to be worthwhile, and superior to dozens of similar efforts from older and more “established” “boutique” labels, and often come in welcome double features, with their strongest releases being given the whole hog Blu-ray treatment.

Thus it comes as a complete bafflement as to how a film like The Telephone Book wound up as anything but a flawed co-billing on a sexploitation double feature.  Honestly, I don’t know what to say here – I haven’t picked my metaphorical jaw up off the allegorical floor yet.

I imagine fans of Buck Henry style sex comedies of the hippie era, former hippies missing the delights of such thoughtfully artistic statements as Melinda Gebbie’s Tits n’ Clits and desperate devotees of obscurities of the counterculture underground may find a lost gem of antiquity and their youthful and more indiscreet days herein.

Me?  I’m waiting for the next Vinegar Syndrome release, and pretending this one never happened.