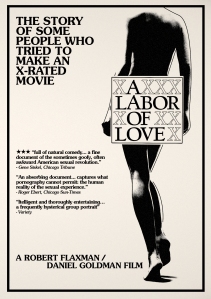 Something quite unexpected arrived today: the latest release from exploitation archivists and preservationists Vinegar Syndrome.

Where prior releases have centered on long considered lost entries in the world of drive in, grindhouse and independent film of the heyday of the genre in the 60’s and 70’s, this one was, while certainly closely related to if not tangenitally part of said milieu, not a film proper at all, but a documentarian record of the creation of one such project, going by the name of A Labor of Love. 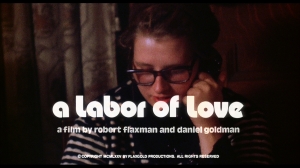 Head shakingly naive and somewhat unbelievable by today’s far more jaded, if not paranoid standards, the documentary follows a troupe of young thespians and assorted crew through their misguided attempt to create an art film akin to “(a) combination (of) Fellini, Truffaut and Bergman”.

While the film being created naturally fails in any respect at such lofty goals, the documentary itself bears a surprising similarity to such metafilms as Truffaut’s Nuit Americaine (Day for Night) and Olivier Assayas’ philosophical negation and reversal of same, Irma Vep.  In displaying the foibles and earnestness of those on the other side of the camera, this becomes more than a simple ‘behind the scenes’ to which the DVD generation has become accustomed – vapid, self congratulatory and safe glad handing and back patting with a few line flubs thrown in for good measure.

* in the end, we are informed that the producers “rescripted their film and photographed new scenes…now in release, contain(ing) no explicit sex scenes and rated R.”

The director himself, native Frenchman Henri Charbakshi*, appears to have set the whole affair in motion with his own intrinsic gullibility. He sets out to create a film called “the Last Affair”, about a woman who discovers she cannot become pregnant by her husband, and who winds up frequenting imaginary all-male brothels to rectify the problem (!)

Unsurprisingly, the backers he attracts see this as ripe subject matter for sexploitation (and in fact, for pornography per se). His cast and crew, deluded by a potent admixture of filmic and artistic dreams and the sexual liberation polemic of the era, stick around for the ride…and so our story begins.

Interviews on set of actors and the director himself reveal their conflicted feelings and thoughts about the transformation of the affair, though they do continue to forge ahead with the project in spite of reservations.

The usual interpersonal relations behind the scenes of a film production come to a greater prominence due to the additional transgressive nature of what the film is becoming, with one of the male leads getting “totally turned off” by the diva behavior of his female partner (not to mention a certain biological faux pas that comes to the fore), and a “daughter” who proves so traumatized by her scene with her “father” that she refuses to be interviewed by the documentarians thereafter. 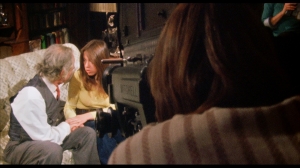 Documentary directors Robert Flaxman and Daniel Goldman deliver a surprisingly vibrant and direct “tell all” approach, sticking around for the expected sex scenes far longer than one might expect, and capturing some extremely candid moments on film, from one on one discourse with the participants to the many small breakdowns and issues that take place in the course of Charbakshi’s* filming.

For a nigh on 40 year old film shot on 16mm and making near exclusive use of the source lighting of the subject, A Labor of Love looks pretty damn good – while visuals are about as soft as one might expect given the limitations and age of the filming, Process Blue delivers its usual strong cleanup job, giving us an effort that very likely comes to viewers in a form superior to that which those theatergoers lucky enough to have caught it during its brief initial run ever got to see.

While exceedingly brief (clocking in at a mere 67 minutes) and bearing one lone extra beyond the original trailer (a Q&A with Flaxman from a recent festival screening of the documentary), this is yet another worthwhile rediscovery from Vinegar Syndrome – a fascinating mix of amusing disbelief at the unaffected sincerity and naivete of the subjects under study, candid tell-all and ultimately human portrait of a troupe of would be professionals chasing after a dream, misled and misdirected by the sharks of commerce and philosophical delusion.

Or in short, it’s a film about people much like ourselves, in what amounts metaphorically to a very similar situation we currently face as a society – deluded by artifice and prestidigitatious misdirection as we are driven to lose the very things that we most value in pursuit of what is ultimately nothing more than a lie.

And in the end, this begs a very important question, and demands a bit of metacognitive self-reflection as to where we’re going as a nation, a culture, and in fact a species, in the wake of “corporate personhood”, surrender of civil liberties and hard fought worker rights and benefits, lack of proper response to global warming and changes in the ecosystem, and blatant, crass manipulation by our bought and paid for “representative” media, “leaders” and “authorities”.

When it comes down to brass tacks, maybe we’re not so damn sophisticated and self aware after all.