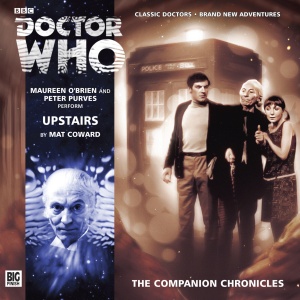 It took me years to accept the concept of safe, edible fungus.

Despite at least half of my familial heritage, it took decades before I discovered just how much I loved the taste of mushrooms.  And yogurt?  Forget it…my wife only recently persuaded me to add a dash of such to the diet as a proactive health measure.

Too many memories of films like The Stuff and youthful immersion in the likes of Lovecraft and Howard brought to mind horrible ideas of sickly fungoid growths taking over basement rooms, parasitically feeding on human corpses and perhaps even coming to some grim form of sentient life to terrorize or do battle with the protagonist (and let’s not even think about The Stuff…).

And so it is that we come to this month’s installment of Big Finish’s Companion Chronicles line.

Yet another interesting concept from the minds at Big Finish, the line itself manages to gather together various and sundry Tardis travelers, generally sans Doctor, to either act out or line read audiobook style postulative tales that had never before been related of their time in time travel.  As a general rule, at least in the earlier episodes to which I’d been accustomed, they tend to feature one companion (generally an early series one such as Jamie, Polly, or Susan) whose Doctor had long since left us, doing a solo schtick.

Not bad, certainly a nice idea, but a bit less exciting than the sort of full cast action that the main line and spinoffs like the Eighth (and later Fourth) Doctor Adventures or the eventual Lost Stories line had to offer.  I’ve checked in periodically, but haven’t been all that consistent in following the line.

What a pleasant surprise, therefore, to renew my acquaintance with the series on this month’s offering, Upstairs, featuring Maureen O’Brien (Vicki) and Peter Purves (Stephen Taylor).

The Hartnell era Tardis crew Mark III arrives at what turns out to be Number 10 Downing Street (residence of the British PM, for non-Brits or Anglophiles) at the very turn of the century, in the year 1900.  They discover they are in a rather strange attic, a mazelike one that seems to go on for eternity.  Eventually they find their way to one of the building’s residents, which quickly brings the trio face to face with an alien fungus determined to reroute the course of history.  Mushroom jokes abound.

Basing the tale on a few factual oddities (the “mysterious” and/or youthful deaths, afflictions and rumors of supernatural forces that surrounded the building and its inhabitants during the 19th century, and the fact that the building was poorly developed, sporting faulty foundations and such at its inception), author Mat Coward digs in deep to yet another of history’s mysteries to provide an explanation that takes us straight into Tardis territory.

O’Brien, who with our recent delve into his full televised run turned out to be my favorite of all the Hartnell companions, delivers an amusingly exaggerated caricature take on the Hartnell Doctor that is simultaneously quite chuckle inducing if not hilarious in its delivery and, oddly, even more dead on than William Russell’s version in this month’s Lost Stories episode, The Dark Planet (!)

Purves sounds like he may have been recorded in a different location or facility, with an odd echo that separates and isolates him from the action a bit, and he gets comparatively few lines anyway – it’s really all O’Brien’s show, and the lady positively runs with it.  Of all the Companion Chronicles to which I’ve been exposed thus far, outside of the amusing Nicola Bryant/Colin Baker Piscon Paradox, this is by far both my favorite and the most enthusiastically acted.

Once again, the music (this time by Richard Fox and Lauren Yason) proves of some note, delivering enough edginess and creepy atmosphere to both enhance and properly set the stage for the long early scenes in the attic.

With sufficient nods to the lighter end of Who to complement O’Brien and Purves’ good natured performances, the story contains more comedy than one might expect, while simultaneously being the sort of cracking, conceptually oriented intellectual mystery-adventure the series was known for during its original 1963-1989 run (whether that tradition continues in the revival series or no is a conundrum I leave to the individual reader to ponder for themselves).

In the grand scheme of things, I found myself both engaged and entertained throughout, which is far more than I was expecting of what is essentially a one woman show with punctuation from Purves (the two also essay the roles of assorted residents of the famed locale, effectively “rounding out the cast” among themselves).

Perhaps there’s more to this line than I recall…or maybe O’Brien is just THAT good.  Given how entertained I was with both of her efforts this month (see also my take on her William Russell-paired tour de force The Dark Planet), I’m inclined to believe more of the latter, and look forward to hearing more from her with Big Finish in the future.

I’ll refrain from posing the question as to whether the alien fungus explains certain events in British politics post-1900 (cough…the 80’s anyone?…cough), but will wholeheartedly recommend this excellent and amusing adventure to those, like myself, who have previously tread this line with a tender foot.

Forget any preconceptions, and dig in.  After all, mushrooms (and yogurt) are supposed to be good for you.