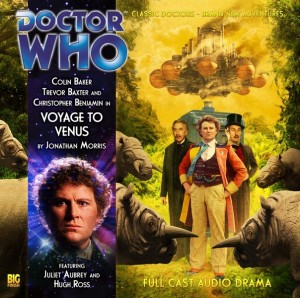 “I’ll have you know that travel in the Tardis is as smooth as a slide down the frictionless slopes of Mt. Sheer on an anti-Newtonian skateboard!  A transport…of delight.”
– cue extremely rough trip.

Today we’ll be discussing the ‘middle eight’ in a four part suite of non-series appearances of the lovable gaslight duo, those that fall outside the official Jago & Litefoot range of yearly offerings.

What makes these particularly of interest is that they pair the fellows with none other than fellow logophile, philologist and “champion of the joys of the English language'”, “old Sixie” himself, Colin Baker.

As anyone familiar with Jago, Litefoot or Baker’s Doctor would be all too aware, putting three such loquacious gents together is a veritable recipe for linguistic delight.  Between this triumvirate of talkativeness and gaggle of grammarians, one can only imagine that it would be quite difficult to get a word in edgewise…

It should be noted, before we delve in any deeper, that these two interweaving ‘special releases’ serve as a bridge between Series 4 and 5 of the Jago & Litefoot line, and as such, I’m coming to them a touch out of order.

It was a therefore bit of a head scratcher to hear Colin’s Doctor inviting the chaps into the Tardis at the opener without explanation – while matters proceed apace, it left the niggling question as to just how they are supposed to have met up (much less agreed to their first trip outside the confines of Victorian England) in the first place!

As the title would certainly seem to make plain enough, our first visit is to the planet Venus, where we encounter a humanoid race of Amazonian bent – in other words, an all female society.

This takes place in the far flung future, when our respective home planet is a long dead, airless and lifeless husk.

“You don’t think we should…lay a claim to the land, do you?…on behalf of Her Majesty and the British Empire, of course.  Stick a Union Jack in the heathen soil, and whatnot.”

“Do you have such a flag about your person, Henry?…then I suggest we defer our…colonial responsibilities for the time being.”

After the initial adjustment to new surroundings and encounters with the major players that generally begin these sort of tales, in short order Jago manages to make friends with the thraskins, an apparently animalistic slave underclass who allow for some ever-more timely politicosocial commentary in classic Whovian style.

The female-centric upperclass live in the clouds (both literally and metaphorically), while the thraskins (and the peaceful herbivore shanghorns, the callous hunting of which kicks off both the Doctor’s outrage and the tale per se) reside in the recently-spawned rainforests planetside.

There’s a bit of political intrigue and a hint of corporate-industrial suppression of the facts in the interest of maintaining the current power structure and protection of the status quo, and it all seems horribly apropos to the GMO-centric, pro-fracking and nuclear, global warming denying SuperPAC run society we currently struggle to awaken the general public to.

In sum, Voyage to Venus proves perhaps the most contemporarily relevant Big Finish Who since Live 34, but far less grim in tone given the players in question – author Jonathan Morris is to be credited for scripting such a timely and allusive tale while still managing to maintain an overall lightness of tone that keeps matters from turning overly turgid.

We also get a cute tie-in or two to the Pertwee era Peladon stories (of all things!), when Jago & Litefoot sing some maddened shanghorns to sleep with a round of “God rest ye merry gentlemen”, thereby introducing music to the Venusians and explaining the familiarity of melody to Pertwee’s “Venusian lullaby” thereof.

Though I certainly appreciated this cheesy little touch, I would have loved to have one of the trio be the spark initiating Pertwee’s infamous Venusian Aikido… 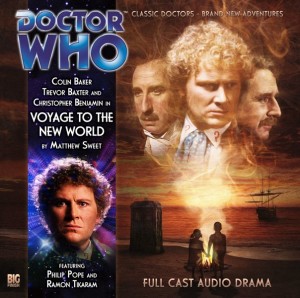 The chaps’ desire to throw back a pint or two (or failing that, at least to indulge in a spot of fish & chips) winds up getting them involved in the mystery of the lost colony of Roanoake.

There’s a whole lot of Who-style historical conjecture and restructuring, with Algonquin Indian chief Wanchese, Sir Walter Raleigh and a man who history notes as part and parcel of the mystery, one John White.

The official record tells us that White, a colonist at Roanoake, sailed back to Britain for supplies.  His return was delayed by the confiscation of his ship (as part of the war effort against Spain at the time) such that his return to the colony came a full three years after his point of departure.

At that time, he discovered an abandoned settlement, with the word “Croatoan” inscribed on a tree nearby.  When White investigated the nearby island bearing that name, there was no trace of there ever having been a colonial embarkation, much less settlement thereon.  The actual fate of the colonists remains unknown to this day.

Or at least, until Matthew Sweet (no, not the indie rocker famed for such hits as “Girlfriend” and for revitalizing the careers of Television and Voidoids guitarists Richard Lloyd and Robert Quine, respectively) set his pen to address the affair…

“Sorry about him…Mr. White, here, loves his guns…his ruff is ridiculously big too.  I think we all know what that’s about…”

Like most historicals, this is a bit of a hard one to review, at least without getting bogged down in the tit for tat of history and its myriad vagaries.  What would be a fairly simple plot to chat about (or dance around the details of) in a more standard science fiction based or modern day milieu becomes a hopelessly tangled skein, inviting a microscopic dissection of minutiae, separating established record from flights of fancy.

About the simplest it ever gets would be the televised Peter Davison era serial The Visitation, where the basic story can be boiled down to the amusing conjecture: was the Great Fire of London really caused by The Doctor and the Terileptils?

But for the most part, these sort of stories present more problems than they’re worth, at least in terms of the sort of discussion, dissection and allusion which comprise the art form of the intelligent review.

As such, I’m unsure how to really give a sense of this offering to the uninitiated prospective listener.  Above and beyond the conundrum of record and historical loose end the tale revolves around, we get a rather convoluted bit of travelling back and forth in time, an island of ghostly children who actually turn out to be alien symbiotes, kidnappings, sacrificial offerings and broken treaties, and a historical figure piloting the Tardis who essentially causes the whole mess in the first place (or at the very least makes the situation far worse than it already is).

“Now look here, you ghastly little urchin…I don’t know what your game is, but you’re beginning to give me a case of the horrors!”

Once again, Jago winds up separated from the two doctors, this time becoming symbiotically attached to one of the children (who literally spirit their colonist victims away, and cause them to fade away with consumption…the puns had to be intentional) on their stronghold at Roanoake Island.  Litefoot and the Doctor, meanwhile, wind up with Smith and Wanchese, heading back to England…  Well, that’s the intention, anyway – things manage to get a bit convoluted.

One of those stories that actually makes less sense (and gets more tangled up inside itself) as you get deeper in the narrative and closer to the finish, this one is a bit difficult to rate in the end – do we congratulate Sweet on such a Gordian plot (pun intended)?  Or do we walk away scratching our heads in confusion?  While I can say that the story did have some intrinsic merits, this is, all told, a conundrum I leave to the individual reader and listener to decide for themselves.

As things wind to a conclusion, yet another one of those troublesome time storms intervenes (something about chronal bubbles and froth), which always means trouble for the cast.  After bidding the pair a fond adieu in front of their favorite pub, the Doctor departs, leaving Jago and Litefoot to discover, to their dismay, that while they are indeed in the right place, they’re also in a very wrong time.  Can you say “swinging London”?

All in all, I will remain forever grateful to the folks at Big Finish for putting one of my favorite Doctors together with two such delightful ersatz companions, “bridge the gap” time filler “special releases” or no.

Personally, I’d have made these part of one of the yearly series, but given their low cost (and the simple fact that separating them like this gives us all that much more Jago & Litefoot to enjoy), this approach may have been the best road to take in the end.