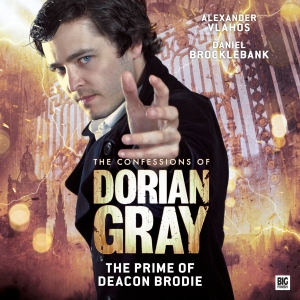 “A man with no soul has a strange relationship to hell.”

2 years after WWI, on Samhain eve, Dorian travels to Edinburgh to catch up with an old…friend named James Anderson (Daniel Brocklebank).

A former military comrade and poet, Anderson recently published some verse about the man who saved his life and affirmed his belief in humanity amidst the most inhumane of all scenarios: war.

After being accosted by the eerily presented street urchin mob the Guisers, Dorian meets up with his former companion at the appropriately named World’s End pub.  Though Dorian reveals and confirms his identity, James refuses to believe – the man he knew saved his life at the expense of his own, claimed by the horrors of chemical warfare.

“His gas mask, a sacrament, passed between us / proof of that which made us / not animals, but men”

When James flees, distraught, Dorian runs across a hooded figure who offers his services.  By chance, his lodgings also feature a mysterious wardrobe crafted long ago by the same man, one Deacon Brodie.

“All your desires catered for.  My, that’s a bold claim. I have so many…
And with an invitation like that…how could I refuse?”

Dorian pays a visit to Brodie’s shop, and discovers him to be something of a legendary figure, as both craftsman and gentleman thief…and something more besides.

“You sound rather as if you admire him.  Are shopkeepers usually so fond of thieves?”
“I admire his panache.  And I am mindful of heritage, too.”

After feeling him out a bit and sussing to their apparent shared secret predilections, the shopkeeper takes Dorian to a secret room filled with what appear to be lifelike mannequins.

“You see here an option for every occasion…they’re waiting for you, sir, and others like you, to see whom you desire.  You can have any one of them at all.”
“How disappointingly prosaic.  Look at me, man.  Do you really think I need to pay for indulgences…for favors?”
“No, you misunderstand me. You can’t have them, sir…at least, not in that sense.  But you can be them.”

The legendary Deacon Brodie has apparently discovered one of the great secrets of alchemy – the transmigration of souls from one body to another, albeit supposedly for 24 hours only.  Pining after his lost James, Dorian agrees to take the plunge and make use of the shop’s services.  While Dorian gets his shot at reunion, there’s a catch to the whole deal…

Trapped in a dying man’s body while his own is taken by a body-hopping fellow immortal, can Dorian reverse the switch before it’s too late?

While this is very much a different Dorian than the one Wilde created, author Roy Gill has worked up a clever, appropriately eerie variation on a hoary concept: the fact that you can never go back again, particularly in terms of relationships.

Despite the obvious variations, the general zeitgeist of the character is unchanged.  Still very much the Decadent, Gill and Vlahos’ take on Dorian Gray is both more heroic (in the sense of becoming more of an adventurer type, at least) and more openly homoerotic.

Wilde himself directly credited Joris Karl Huysmans‘ seminal A Rebours (Against Nature) as inspiration for the writing of Gray, though for the insider, a closely linked but clearer lineage becomes apparent: that of Jean Lorrain’s Monsieur de Phocas (and perhaps its progenitor of ‘One Possessed‘.)

Phocas (or more precisely, the duc de Freneuse), like Dorian is “advised” and “led astray” by the older and more experienced gentleman Claudius Ethal (an obvious analogue for Lorrain’s own expat neighbor Algernon Swinburne, and direct parallel to the relationship Dorian has with Lord Henry Wotton).

He similarly wends his way from a de facto “state of innocence” to a wholly initiated aficionado of all the vices life has to offer, eventually crossing lines man was never meant to cross.  The interplay between Lorrain’s Phocas and Wilde’s Dorian Gray should be obvious (though even the best of us would be hard pressed to assert Lorrain to be the more seasoned or clever author here).

While at least the final published version of Wilde’s novel keeps the homoerotic aspects more on the level of subtext (though it’s quite apparent that Basil’s adoration of Dorian and the latter’s “tutelage” under Wotton bear far more loaded overtones), the Big Finish take on Dorian, while still coy and clever enough, is far less circumspect about things.

And why not, after all – times have clearly changed since the days of the Wilde trials.  That said, for those possessed of a less open or Decadent sensibility, this could prove a tad offputting, so do take note.

Alexander Vlahos, with his warm smoker’s rasp, is possessed of a comfortably assuring tonality that simultaneously soothes and relaxes the listener and proves suggestive of a more Decadent sensibility wholly apropos to the great Oscar Wilde’s most infamous creation.

Unlike the more obvious separation of duties that characterizes Big Finish’s Doctor Who lines, with Dorian Gray the sound design and music composition are more subtle, and appear to work in tandem.

The low electronic hum, echo and whine of Brodie’s secret workroom, the atmospheric walking down the lonely cobblestone streets of Edinburgh… moreso even than the excellent Jago & Litefoot series, there is less of a proper soundtrack in the accepted sense than a hand in hand amalgamation of music proper and more subtle effects.  As such, hats off equally to Neil Gardner and James Dunlop for their conjoined efforts herein.

Whether fans of Big Finish’s Doctor Who based lines will appreciate The Confessions of Dorian Gray series or no is somewhat hard to predict – it certainly features an engaging, even likeable leading man, a horror/fantasy setting and the company’s usual high standards in writing.

That said, the more openly lavender aspects of the production may prove a bit of a make or break to more traditional or conservative listeners.  Big Finish themselves include a disclaimer noting that the series “contains adult material and is not suitable for younger listeners”, which I’d argue against on both counts.  Even so, prospective listeners might want to take our caveats into consideration if they have any concerns in that area.

For my part?  I certainly enjoyed it, and look forward to hearing more from Vlahos and his somewhat modernized take on Wilde’s fallen protagonist – more antihero than cautionary fable (or even villain, depending on how one reads it).

And as such, I raise my metaphorical glass of absinthe in salute.  Here’s to hearing much more of the eternal Dorian Gray in the months to come.

1 thought on “Audio Drama Review: The Confessions of Dorian Gray – The Prime of Deacon Brodie”