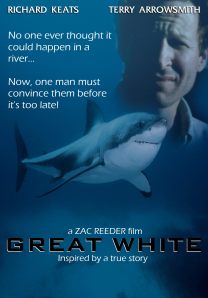 “The fiercest killing machine in the animal world.  The food chain starts and ends right here.”

With each release seeming a bit more professional than the last, an indie film of his own planned to begin shooting this summer, and a release schedule tapping into everything from sharksploitation and the indie films of Todd Braley to classic spaghetti western, there’s nowhere to go but up, and Carty is hellbent on revving the engine into high gear.

After an initial interest in Italian sharksploitation with Enzo Castellari’s infamously banned-by-Spielberg (but highly entertaining) The Last Shark and overtures towards releasing the Franco Nero vehicle The Shark Hunter, Retrovision took a detour into the relatively sordid world of SOV trashploitation (with Braley’s rape-revenge with a twist piece Liar).  The confusingly and redundantly titled Great White (also an alternate release title for the earlier released Castellari film) straddles both of those genres, being what is likely the only classic era SOV shark film!

The film reaches for somewhat of a Jaws 4 modality, with an almost claustrophobic family orientation – less in the sense of ‘family friendly’ pablum than a very personal story of revenge with eyes towards a Melvillian man vs. adversarial nature base motif.

Richard Keats gives us a Richard Dreyfusslike nebbish of a schoolteacher (and marine biologist…couldn’t he secure a more prestigious position with those credentials?) in Professor Steven Miller, albeit a more likeable one than Dreyfus could ever provide, and without the over the top ‘method’ approach that comparison with the often hamfisted “name” actor in question may imply.

When what appears to be one of his sons (though the film seems to imply they’re just age-disparate friends) is killed during a fishing excursion, Miller is pulled into what Reeder might have intended as a whirlwind of events, but which is actually quite casual and subdued throughout, Keats’ low key existential hand-wringing aside.

After an amusing dinner where his son gets a bit too excited at the prospect of vicariously experienced grue, the prof then takes a good 10 minutes driving around moping solely to provide a chance for the audience to hear an atrocious Alice In Chains wannabe moaning and groaning about failure or some such 90’s shoegazy grunge bullshit…trust me, it’s bad.  Yeah, a few decent things happened late in the decade, but seriously.  The 90’s really sucked, didn’t they?

Dillon’s son David (R.J. Collins) is a bit of a sissy, not helped by the familial fear of water or his Macaulay Culkinesque prominent lips and pale eyes, so it’s no real surprise that his girlfriend looks like his mother… He’s the antithesis of manliness, even among such a laconically low testosterone cast (yeah, yeah, there’s that drunken idiot at the dam yammering about his leather jacket, but please…).

Keats fares somewhat better than his son with the still rather average if vaguely Mitzi Kapture-goes-Thirtysomethingesque Stephanie Rose Allen, but the ultimate casting horror show goes to a pair of jetskiers essayed by a busty middle aged mom and a fat hairy guy with tits and a Sheamuslike face who finds the need to traumatize the audience by taking off his shirt.  I think I’m still recovering from that one.

There are some real zingers peppered throughout the running time resulting from the wooden non-acting of various members of the cast, especially the two dopes at the dam and the doofy teens at the arcade (remember those?) – “forget them, they’re just a bunch of losers.”  Indeed.

Worst actor award goes to a fright wig bedecked black guy who delivers his entire brief performance in a squeaky voiced, arm waving stereotype jive who further seems to have zero emotional reaction when his buddy gets eaten.  I’m actually wondering if the sequence was filmed silent and some white dork was doing an impression of a black man, it’s that bad.

As the killings begin to mount and sightings become more widespread, the laconic police and golf-obsessed elitist mayor still don’t want to know about it.  Luckily, Keats has effeminate teachers pet Sam (Ryan Moe) and town lush ‘Sarge’ (C.J. Morrow) on his side…

“Marine biology, huh?  What the hell you doin’ hangin’ around this river, then?”

Sarge the drunk is hilarious, with his Korsakoff’s Syndrome-induced senile dementia inflecting his rambling, asthmatic cackle-punctuated story of cleaning out a carny shooting gallery of its prizes (“I had enough stuffed animals to give away as presents for two whole years!  Somebody gets married?  They get a big red dog!  Somebody’s birthday? They get a big brown bear!…by the time we loaded up the car with all those animals, there wasn’t any room for the girls!”).  If you’re amused by local characters like this in real life, this guy will have you in stitches.

“Hey, sheriff…can you use an extra set of hands?  I’m strong like Popeye!”
“Are you a sober Popeye?”

When David decides to go out with his doofy male friends, they make the incredibly lame, and given the situation stupid decision to sit around in wetsuits paddling around in inner tubes on the river.

No kidding.  Someone over the age of 8 actually did this for fun.

Sure enough, our friend the shark shows up, Miller overcomes his fear of water and saves his son with the help of the abrasive sheriff and old drunken Sarge, who redeems himself by taking out the shark (as our intrepid officer of the law couldn’t hit the broad side of a barn).  There’s one horrible CG explosion to stand in for the shark’s death, and some disgusting fat woman with a face like Tammy Faye Bakker looks by in…well, blasé unconcern.  Fade to black.

But the fun’s not over yet: credit of the month award goes to Barfly #1, essayed by one “Ma’sheen Gun Kelly”.  Uh…yeah.  Right.

Despite several incidences of wooden acting from various members of the cast, the film is surprisingly engaging and well paced, with roving camerawork and mise en scene clearly too complex for the late night television associations SOV all too often brings to mind in the viewer.  While the tracking during static sequences leans towards becoming somewhat obtrusive (as in the restless circling of the two schlub workers at the dam…was a sense of importance really merited by these two doofuses talking beer?), Reeder displays a deft hand at retaining viewer interest despite the reasonably laid back character of the piece as a whole.

In point of fact, Great White was actually filmed in and around Laughlin, Nevada, and Colorado with California plates and “welcome to…” signs prominently on display, so only the densest of viewers is fooled in the end…

Director Zac Reeder shot on Sony Betacam, but some scenes seem video and others more processed, almost film quality. Apparently, Reeder and company de-interlaced the footage to make it 29fps progressive – 5 more frames that the regular 24, giving the video its faux-filmic look while softening and distorting the image to a negligible degree.

Underwater scenes involving actual sharks were bought stock footage-style from a South African company, which adds a layer of professionalism the microbudget of the project would not have otherwise allowed for.

While you can’t exactly say “well written and acted” with some of the cheesy dud lines and awful nonacting of some of the cast, Keats and Allen are surprisingly competent for a no budget indie of this ilk, with their all too believable performances and Reeder’s thoughtful, deliberately paced script and direction more than carrying the multifarious weaker cast members in their wake.

Extras are slim, mainly consisting of two trailers and a photo gallery, but there’s a bit of a rib tickle for readers of Third Eye and listeners to the podcast to be found in the somewhat generically titled “retrospective”.  A brief run through of the history of the film production and how it’s been remastered and upgraded from its flawed prior releases, see if you can pick out some familiar dulcet tones in the narration…

All told, this was something of a welcome surprise, and quite rare for the often seedy and exploitative SOV genre: a moody, philosophical character piece falling somewhere between the usual amateurishness of the no-budget “backyard” production and a far more engaging and mature piece approaching what used to comprise “proper” film in the days before Hollywood’s degeneration into a series of cipher characters, checked off “beat points” and CG explosion lightshows to cover for the fake emotion and emptiness at the core of contemporary offerings.