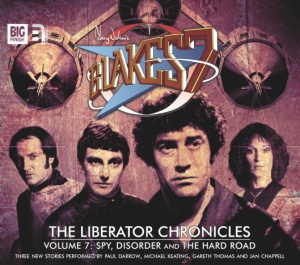 “Like any good dictatorship, they kept anybody who opposed them isolated and off balance.  Revolution could only come when a critical mass of antagonism came together.  And I wanted to make that happen.”

While the recent introduction of Blakes 7 the Classic Audio Adventures has brought nearly the entire original season 1-2 cast of Terry Nation’s classic sci-fi series back together for the first time in decades, in point of fact, Big Finish has been mining this particular series for two years now.

The Liberator Chronicles comes to us as a series of boxed sets in release three times a year.  As the name might imply, this is the Blakes 7 version of the long running Companion Chronicles, featuring smaller cast performance/readings of the material and codirected by Companion Chronicles regular Lisa Bowerman.

With each showcasing one or two original cast members, these don’t carry quite the same fan appeal as the fully acted ensemble pieces of the Classic Audio Adventures, but they’re pleasant enough diversions for the diehard Blake’s fan, and nowhere nearly so grim as the earlier BBC audio iteration of the late 90’s.

This time around, we get treated to two duo pieces featuring Michael Keating’s Vila, first alongside Jan Chappell’s Cally and then with Paul Darrow’s Kerr Avon, and finally a solo Blake tale with the inimitable Gareth Thomas.

Simon Guerrier’s Spy shows an undercover Vila and Cally attempting to locate and recruit Dith Hartley, a fugitive with access to the communications center in a grim Federation-dominated city bereft of hope.

Using the tried and true tactic of hide in plain sight, they pose as an often flamboyant and publically argumentative married couple (if you can imagine that!) with the ultimate aim of disrupting said communications system allowing for Blake to lead a revolutionary charge at the planet’s capitol.

Unfortunately, when they finally make contact with their inside man, the two find themselves running afoul of the authorities, with Cally in particular paying a high price for keeping silence…

Chappell very much takes a backseat to Keating’s amusing tour de force here.  One of the few times Vila appears somewhat believable as an underworld denizen (albeit a particularly peripheral and low level one), Spy allows Keating to dial back the overemphasized cowardice and reluctance of the character just a tad, with a dash more street savvy coming to the fore in its place.  It’s a welcome development for the character, and long overdue – one can only hope this bit of growth is retained and built upon in future adventures.

While decidedly far afield of the comparative ‘extremes’ of, say, the gruesome Doctor Who tale Project Twilight, the lets-make Peri’s life horrible melodrama The Reaping or Dark Shadows’ somewhat twisted The Flip Side, I take no pleasure in hearing beloved characters submitted to physical or mental torture, and fail to comprehend the psychological underpinnings motivating an audience that would so do.

As such, I could have done without the ‘torture’ of Cally (which she further subsequently blames on Vila), and am sure the threat of discovery by Federation forces (and their cruel fascistic leanings) could have been put forth in less intense fashion without detriment to the story per se.

That aside, the first half of the adventure is quite amusing and even bears a certain similarity of tone to the adventures of Jago & Litefoot in its mix of (slightly inept) subterfuge and undercover work with light humor, and overall comes recommended.

“Vila, I have allotted a few minutes in this briefing for you to whine about how you don’t want to go, but you could just shut up and save us all some time.”

Next up comes Eddie Robson’s Disorder, which brings Avon and Vila to a Federation space station in the process of being decommissioned, with operations being moved to another port of call.  Recognizing that its computers contain strategic Federation security data relating to insurgents (and thus potential allies), the Liberator’s resident computer espionage expert and everyone’s favorite thief go undercover to infiltrate the satellite and retrieve a copy of the databank for themselves.

We further learn that while Vila has good taste in feminine coiffure, being a fellow aficionado of the ponytail, he also, like all too many of us, proves a bit too easily manipulated by the fairer sex.  Avon is typically more savvy about matters, accurately assessing the situation at first listen.

“She certainly sounds like a professional, a law enforcement professional…ah, she appealed to your desire for flattery.  Is she pretty?”

There’s a very Grand Slam/Topkapi heist film feel to the affair, with the mismatched duo working all the standard high security thievery tropes along the way.  Robson injects amusing bits of dialogue and character interplay at any given opportunity, which in no way defuse the overall tension these scenarios generally elicit in the audience.

Vila even gets an uncharacteristically metacognitive bit of soul searching in, when he believes the rest of the Liberator crew to be dead…it’s nice stuff, and again serves to expand the character a bit over the Norville “Shaggy” Rogers thing writers so often fall back on.

As with other Blakes audios of late, Paul Darrow’s Kerr Avon comes off a bit tired if not a tad disgusted in place of his more traditionally cynical demeanor and delivery.  While always my favorite character in the Blake’s universe and a pleasure to see in his sundry appearances in various horror, sci-fi and cult television and film roles over the years, it does raise the question as to whether he’s quite as eager to return to the role as most of the others appear to be (particularly Keating, who seems to be having the time of his life).

Regardless, both character and actor are long known for their dark undertones, and this could in fact be a deliberate affectation.  Either way, I’m certainly glad to hear Darrow essaying the role once more, so this becomes more of an intellectual ponderable than an actual concern in the grand scheme of things.

“Workplaces don’t agree with me.  This is exactly what I never wanted to do with my life – sitting at a desk, processing invoices, programming packing drones…and it certainly wasn’t what I expected when I joined up with Blake!”

In any case, it’s a pleasure to hear the two working together in what proves to be the set’s second espionage operation, this time operating in a more technical, “hard skills” milieu than Spy’s more interpersonal “soft skills” approach, serving as a welcome contrast and closely related companion piece thereby – an effective yang to Spy’s yin, easily equalling if not bettering its partner in the process.

Besides, Avon, being the wiser and more cautious of the two, comes out the true hero of the piece…and who could argue against that?

Finally we get a bit of an oddity, wherein Roj Blake takes The Hard Road, heading off alone in an attempt to recruit a fellow resistance fighter to the cause.  This turns out to be a bit of a daunting challenge, as the party in question is actually a space pirate…

“I want them to remember it all.  Not just the victories…I want people to remember the choices that I made, the mistakes as well as the successes.  We have to see, clear eyed.  Anything else, and we slide back towards falsehood.”

With Trel Dekkan (Andrew Whipp) serving as a fairly obvious foil, author James Swallow forefronts the differences between Blake’s more idealistic revolutionary stance and the sort of predatory opportunists that tend to gravitate towards (and often take over) such movements historically.

“I remember the old Roj Blake…back when you were standing for the Freedom Party in the Terran elections.  You’d have got my vote…if I wasn’t a wanted felon at the time, of course.”

A particularly introspective piece, this is the only of the three stories in the present volume to be pointedly geared towards the more standard diary reminiscence the Companion Chronicles/Destiny of the Doctor/Liberator Chronicles line tends to operate within.  To include such extensive soul searching in an ensemble affair would just come off strange, if not wholly extraneous.

“I returned to the Liberator as quickly as I could, sickened and dismayed by what I had seen on the planetoid.  How could I have misjudged Dekkan so badly?  His cause was the same as ours, that wasn’t in question.  But his methods?  Killing non-combatants, intimidation and torture?

…perhaps I was naive to think that one day, we’d sweep away the corruption of the Federation…that Servalan and her kind would be brought to justice before the people.  But I couldn’t find it in me to let all that hope fall away, to embrace hate.”

Like all fellow idealists and enemies of oppression, manipulation and totalitarianism, Blake is forced to face a basic problem with the utopian ideals underlying resistance to an evil status quo skewed towards the rich and powerful at the expense of the remaining 99% of humanity – namely, the fallibility of human nature.

“Now, I am become death, the destroyer of worlds.” – J. Robert Oppenheimer, of the Manhattan Project

Like Enlightenment philosophers such as Locke, Rousseau and Montesquieu horrified to see their liberationist writings devolving into the horrors of the Reign of Terror (and worse, the subsequent devolution to fascism under Napoleon) or expatriate scientists driven to despair over their efforts being utilized in the creation of the atomic bomb, Blake comes to recognize that even the purest and most egalitarian of ideals bear an unfortunate tendency to subvert into oppression and disaster for the very people they intend to free, thanks to infiltration from savvy and opportunistic huckster types with sycophantic obesiance paid to the ideal, but very personal and self serving motives underlying.

“You’re not a rebel, Dekken.  You’re just a murderer…even Servalan has more principles than you do.  You don’t want freedom.  You just want a chance to exercise your hate…to kill, and claim it was for the greater good.  You sicken me.”

In short, as long as we have fallible, selfish and foolish human beings placed in a position of authority over another, we will always have strife and oppression.  And with total anarchy comes an even worse widespread chaos, a true “dog eat dog” world where each man strives against all others.  Either way, we all lose.

But does that mean we need to give up on our ideals, or submit to oppression in fear of something worse to come?

Like Blake, those enlightened enough to resist must further struggle with these questions on an ongoing basis, weighing out positives over negatives in each daily choice, conversation, action or inaction…while never submitting to despair, and never giving up on fighting institutionalized or interpersonal evil wherever it may lie.

Because without ideals, without dreams, without art and aspiration and faith in a better tomorrow, we have nothing…we are nothing.

Roj Blake, for all his dichotomies and choices for good and bad, exhorts us all towards a healthy examination of our beliefs.  But the story doesn’t start or end there.  Because he also teaches us, regardless of how difficult or dark it may seem and whatever the obstacles that face us, to always stand firm and act in what we know to be right.

And no matter what the odds against us, to always keep the faith.