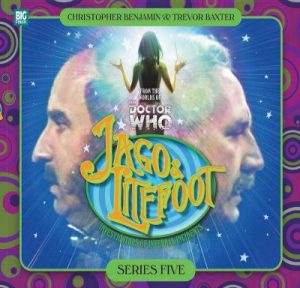 “You see, we were…sent forward, through time…it’s a long story.”

Boy, everyone seems to have adapted quite well to the future!  Nearly 75 years on from their own time, and yet they appear to have no problem fitting in (more or less) to the heyday of swinging London.

“I am indebted to you, for your inestimable company…it’s been such fun.  We must do it again sometime.”
“Indeed we must.”
“But not just yet, if you don’t mind…could do with a day or two.  Let me nerves settle.  Possibly a week or two.  Maybe longer.”

Accidentally brought to the proper place but a very wrong time…the year 1968, to be precise…subsequent to the adventures detailed in Voyage to Venus and Voyage to the New World, the intrepid Victorian dynamic duo consisting of forensic pathologist Dr. George Litefoot and theatrical impresario Henry Gordon Jago attempt to make the best of the situation, securing some measure of gainful employment.

“So this is it, then?  Doomed to live out the rest of our days in an age of motorcycles, drainpipe trousers and weak beer?”
“Oh, I don’t know, Henry…some aspects of this time are rather agreeable!”
“Such as?”
“Well…there’s the cinema, for a start…there’s less poverty, particularly amongst children…and there’s the National Health Service.”
“Alright, I’ll give you that.”
“There’s also women’s suffrage, comprehensive education, aviation, heart transplants, apparently…and they’re even planning to put a chap on the moon!”
“Yes, alright.  But apart from the cinema, less poverty, the National Health Service, women’s suffrage, comprehensive education, aviation, heart transplants and a man on the moon, what else does this decade have going for it?”
“Miniskirts?”
“Alright, alright…you may have a point.”

But it is Jago’s venture into the world of sixties entertainment that provides the linchpin our first tale hinges upon, when he joins the talk show panel of one Timothy Vee (Ben Willbond).

“When we met him, the Doctor claimed to be in possession of a time machine.  Normally, one might be a little skeptical.  But having accompanied the Doctor on a number of extraordinary adventures, we took up his offer to take us on a flight in order to show off his contraption.”
“And would you know it, we wound up on Venus!  In the far-flung future!  The whole place was ruled by Amazons, with green feathers like exotic parrots!  And then after that, North America!  Soon after it was discovered and settled!”

Big Finish regular Duncan Wisbey (Live 34, Lurkers at Sunlight’s Edge, Heroes of Sontar) essays the role of Detective Sgt. Sacker, grandson of Dr. Ormond Sacker (assistant pathologist to Litefoot, who met an untimely end in the course of Series Two’s The Ruthven Inheritance), who tumbles on to the truth of our heroes’ connection to the men mentioned so often in his grandfather’s diaries.   In short order, Sacker confronts the gents, his initial skepticism giving way to partnership in the search for missing artist Delilah Sampson.

Who are the Victorian Values Preservation Society, and will the forces of conservatism finally succeed in turning back the clock and upending decades of social progress?  Don’t give today’s right wing any ideas, they’re already doing their damnedest…

Jonathan Morris (Flip-Flop, Cobwebs, 1963: the Space Race) provides a well scripted and amusing little entree to the season, managing to tie up the loose ends left by the prior season and the two subsequent Colin Baker crossovers while setting the scene and character dynamics for their venture into the decade of social and sexual liberation, contrasting the disturbingly recurrent fantasies of the Thatcherite/Tea Party crowd with the harsh reality of the days they work so hard to restore.

“You have some absurd, romanticised notion of life in the 19th century.  Do you have any idea what it was really like to live back then?  In the choking smog?  With young children working in factories, or being sent up chimneys, or going through dust heaps for scrap metal?”
“But in other ways, things were better than they are now.”
“In other ways?!?  Back then there was more crime, more disease, and let me tell you, your so-called Victorian values were no more than a facade!  Everything you claim is wrong about society now was just as wrong then…if not moreso.”

A clever and engaging little story in its own right, The Age of Revolution is a story that deserves a far wider audience…Litefoot’s speech alone should be blasted from the loudspeakers at every conservative political convention.  Maybe somebody will actually hear the message… 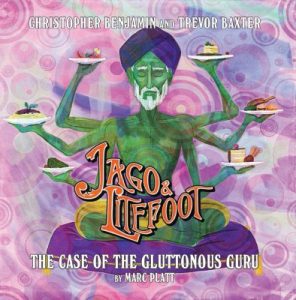 “(Entertainment) the opiate of the masses, hiding the cry of the wounded world.”
“It helps people through, that’s what it is.  That’s what we still do…a bit of light in the gloom.”
“Don’t run away, Henry.  There are answers…”

Next up, we join our erstwhile adventurers as they engage in the Case of the Gluttonous Guru.

Desperately waiting by the phone like a teenage girl in love, Litefoot finds that life as a bookseller can be rather quiet if not ungainful.  Hoping for a call from his increasingly busy and popular TV star partner, he instead gets an invite from Ellie to dinner at the hip new eatery Nirvana.  But something more than panak aloo and tandoori await them…

“…you needed peace and quiet.”
“I needed attention.  That’s the tonic Henry Gordon Jago thrives on…”

Jago, meanwhile, attends a happening with fellow television starlet Guinnevere Godiva (attended by no less than Andy Warhol, yet!).  But she knows the old Fleet Street Palace Theatre and who ran it…and what is the secret of the swami Sanjaya Starr and his Temple of Transcendental Revelation?

Henry embarks on a belching fest, George beats on frogs with a brolly, he and Sgt. Sacker discover the horrible secret ingredient of the menu at Nirvana, and Guinnevere admits some lineage to an old familiar foe…

Enough to make the listener afraid to eat out (and watch their salt intake), author Marc Platt (Loups-Garoux, Cradle of the Snake, Butcher of Brisbane) delivers an unusual offering tapping into the whole Eastern mysticism aspect of the hippie era while simultaneously making something of a reach into Cronenbergian body horror…yet keeping things firmly on the level of light (if not occasionally juvenile) humor throughout.

After two adventures more or less based around Henry’s entree into the world of 60’s telly, we get to explore the flipside of the equation.  And unlike the first two stories this season, this is hardly an episode of Black Books…in fact, there’s little humor to be found.

“Haven’t seen anything about it in the papers.”
“And you wont.  Not for awhile…which gives us the chance to glean what the connection is.”
“Preferably before Sacker and his police chums do the same thing, thus enhancing our growing reputation for dazzling demonstrations of deduction and detection.”

Colin Brake (of the Peter Davison/Peri & Erimem story Three’s a Crowd) pens an eerie bit of business more akin to Series Two or Series Six’s The Skeleton Quay, replete with mysterious old books of magick and the forces that seek them.

What is the Bloodchild Codex?  Why are so many particularly strange individuals willing to pay so dear a price for it?  What is the secret of the “brain drain killer”?  And what does Guinnevere Godiva have to do with all this?

“I’ve been checking up on you.  I have to say, you look pretty healthy for someone who was born in the 19th century.”

Does everyone know the secret of Jago, Litefoot and Ellie Higson?  Between Sgt. Sacker in the first episode, Godiva in the second and the girl only known as “Summer” (Anna Tolputt) in this, it seems that half of London knows they’re dealing with a trio of turn of the century transplants…

With some none-too-subtle warnings about taking things at face value, particularly when it comes to the occult, this is the oddest story of the season, simultaneously fitting into the more “modern” milieu and occupying a completely different headspace ill fitting to the more nostalgic if not camp aesthetic of the other three stories herein.

While certainly an enjoyable standalone, it represents somewhat of a bizarre choice to squeeze into this particular season (though it could certainly be argued, when else would the characters have such a direct connection to antiquarian tomes?).

Justin Richards (of the excellent early Colin Baker/Peri offering Whispers of Terror way back in 1999) closes things out with The Final Act, which brings a pair of old foes back into play, while tying up the mystery of Guinnevere Godiva and granting the boys a way back home in the bargain.

“You’re unhinged, bonkers, the lot of you.  First time travel, then hallucinogenic frogs and now this.”

Paying a visit to his council flats residence (where he resides ‘undercover’ – “so your neighbors don’t know you’re with the Old Bill, then?”), Jago, Litefoot and Ellie reunite with Sgt. Sacker to head a police raid on…well, that would be telling…

Along the way, Jago’s newfound fame proves celebrity travels a sight further than the forces of officialdom:

Eventually, they make their way to a special airing of Those Were the Days, where they hope to ensnare their target.  But when you’re dealing with Jago & Litefoot, there’s always plenty of time for fun along the way.

“Sacker said there was nothing left at the warehouse that could connect it back to Godiva.”
“Nothing illicit, or illegal either.”
“What’s the difference between illicit and illegal?”
“One’s against the law, the other’s a sick bird. (silence)
(huffs) oh, nevermind.  It worked for Judge Jory, the Laughing Lawmaker.”

Jago also displays a way with the ladies…

“I have so much to set up, and I still need to try out my costume.”
“Costume, Miss Godiva?”
“I intend to perform dressed as my namesake.”
“Lady Godiva?”
“Queen Guinnevere.”
“ah, thank heavens for that.  uh…I mean, it would be a shame not to show off your large and lovely…locket.”

As you can tell, the story circles right back into the light humor vein of the earlier episodes, while wrapping up the season and even tying in some welcome plot threads dating straight back to 1977(!)

“Good idea!  I’ll get the crystal, while you haggle with the horrendous homonculus.”
“I rather thought that might be the plan.”

Since it hadn’t come up previously, mention should be made of Jago’s amusingly fey dresser/handler/stage manager Aubrey (Jamie Newell), who provides wry commentary on the action throughout the season, and of course the incomparable Lisa Bowerman (best known to listeners as Bernice Summerfield), whose direction keeps things moving along at a comfortably relaxed yet engaging pace, likely maintaining the series’ much welcome focus on humor along the way.  And that’s not to mention the increasingly prominent role of Ellie herself…kudos as always.

While my personal preferences lie more in the realm of Series Two’s atmospheric, fogbound Sax Rohmer meets Arthur Conan Doylesque adventure, it’s without question the humor and likeability of Christopher Benjamin and Trevor Baxter’s leading roles that keep fans returning to the well time and time again with eagerness.  And it is those aspects  that this season plays to the fore, with a greater emphasis on humor than perhaps any other season or non-series appearance to date.

Some may find all this wink of the eye time displaced look askance at sixties culture a bit silly if not slightly indulgent, but when handled as well as it is here, it’s more of a pleasure than those so inclined may expect.