“I still like the desert.  Everything here is so quiet and predictable.”

Vinegar Syndrome continues its mission of digging up bizarre obscurities with its unearthing of this effort by one Michael Cartel, who writes, directs, stars, edits and puts his wife in charge of Production Management.  Yeah, this is pretty homegrown.

Despite a vaguely filmic feel, the overall impression is that this was shot on video – it has that sort of crispness, immediacy and no-budget dynamic.  While Vinegar Syndrome does also offer this in standard format DVD, I viewed this on the limited edition Blu-ray, which doubtless helped boost any impressions relating to the visual end.

Runaway Nightmare features Cartel in what at first glance appears to be a dual role.  But no, he actually found himself a near-lookalike…

“Yeah, maybe their problem is that, uh, they’ve been, uh…way from, uh, men too long.”

Cartel, formerly of early Code Red oddity Pets and looking for all the world like cornball novelty singer and 70’s talk show host Mike Douglas on a crash diet, is joined by one Al Valletta, a Garry Shandling type who forgets his lines several times in the opening sequence.  This in itself is interesting, as Valletta previously appeared in another Code Red offering, the creepy Sole Survivor, and I don’t recall any bad acting there.

For his part, Cartel comes off like a southern-fried game show prize announcer, with a nasally hollow and fast talking, overdramatic delivery style.  Together, the two of them come off as something of a comedy act – and not necessarily in the intentional sense.

Essentially, this is the whole plot.  These two goofballs (apparently “successful businessmen” running the “Death Valley Worm Ranch”) just happen to be screwing around in the desert, when two guys come and “bury” a box all of three feet deep before taking off.  Our heroes dig up the item (by hand, yet), only to discover it’s a decent looking blonde…

Taking their damsel in distress home to recover, our two knights in shining armor find themselves accosted and abducted by a gang of women, most of whom are varying degrees of cartoon crazy.  One of them is even a cross between a refugee from a period metal video and Elvira.  Why am I thinking of Raven from the Teen Titans cartoon?

Cartel actually gets laid out by a really sorry excuse for a punch from one of them…yeah, by now you’ve probably figured out it’s less a horror picture than some sort of ersatz black comedy.

“Hey, there’s a door over here.”
“oh, terrific.  Somebody forgot to unlock it.”

Women associated with the gang seem to drop in and out of the narrative at random intervals, with a few real lookers (like that redhead at Cartel’s place early on) vanishing entirely in favor of a few recurring leads backed up by…shall we say several lesser lights, so to speak.  There’s even a repulsively huge fat girl whose interest in the boys is worked in to the rather minimalist script purely for comedic purpose.

“Your job is to take those grates right there over there (indicates a spot a foot or two away from the original location).”
“Why can’t they just stay where they are?”
“I dunno…Leslie goes, ‘keep ’em busy, have ’em load and unload boxes…”

So obviously played for laughs as to be impossible to slam, Runaway Nightmare is definitely the most ridiculous non-hardcore film I’ve sat through since Night Train to Terror, but overall, it’s a good thing. 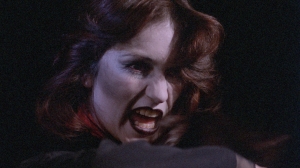 It’s perfectly obvious that Cartel and company are just screwing around, so blatantly lacking in serious filmographic intent as to underrehearse line deliveries and alternate between meandering near-improvisation and total slapstick.  I mean, seriously – even the ostensibly creepy Vampiria (Alexis Alexander) actually resorts to giving Cartel a hotfoot at one point…all that’s missing here is Count Floyd asking how “scary” it all is.

“I’m into sunshine, awareness, good karma, vibes and witchcraft…I’d like to mix our blood.”
“Well, we do have a lot in common, uh…and well have to talk all about that, someday.”

Where the film truly comes off as odd is in that nothing actually happens throughout the better part of the running time.  Al (‘Jason’) gets lucky with the girls, one after the other or a few at a time, while Mike (‘Ralph’) keeps getting threatened by the crazier members with one horrible death after another.

At one point, they even lower a noose onto his neck while Al’s chatting one of the ladies up in the foreground.  Mike gets beat up at a nearby dive bar for trying to apologize for Al’s ‘saving’ another of them from getting hit on by a sleazy local, winds up being the only one caught by the mob during a raid, gets locked away by the government and in the end turns into a vampire or something.  Sure, it’s funny.  But it does get a bit repetitive…

There are indoor scenes that give way to pronounced grain speckling, and the sound is rather thin and hollow overall, but subjected to Process Blue’s usual meticulous remastering, the picture as a whole is crisp and vibrant and very much high definition.  While a highly entertaining oddity, this sort of red carpet treatment is probably more than a film of its ilk deserves…

There’s a great indie rock song on the radio at one point (which Vinegar Syndrome cannily uses for the disc menu), and the scene used for the cover does actually appear in the film (sort of), and a few of the girls are actually attractive (that mysterious redhead from the opening sequence, “Vampiria”, arguably “Fate”) so there’s something to be said for that, at least. 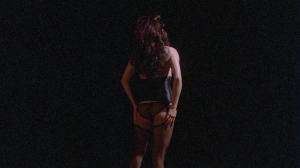 The only extras outside the usual commentary track is a brief bit of business listed as “alternate video shots”, prefaced as follows:

“The following sequences were created without the knowledge or supervision of director mike Cartel when Runaway Nightmare was released on VHS in the 80’s.  The identities of the actresses are unknown…”

What you get here is 3 minutes of extremely soft focus nude inserts involving several topless bits and a girl licking a chesspiece.*  ooh, hot tamale.  Seriously, they’re pretty bad.  As silly as Cartel’s film is, he’s clearly more capable as a director than whoever handled the inserts.

*And guess what, that sequence actually appears in the film proper, as part of a running bit involving one of the few women actually interested in Cartel’s “Ralph”…

Is it a “run out and buy”?  Well, depends on how weird a sense of humor you have, and how much you’d kick yourself if you miss the limited print run.  I thought it was a fun little goof, but realize we’re talking somewhere along the lines of, say, Transylvania 6-5000 here.

You’ll be sure to crack a smile or two, but it isn’t the sort of unintentionally amusing outsider art weirdness you get with a Miami Connection, Ninja III: the Domination or a typical Something Weird oddity.  The deliberateness of the humor detracts from any pretensions at WTF-ness, and while certainly entertaining, like most (intentional) humor, it’s really just a matter of personal taste as to whether it actually works or not.