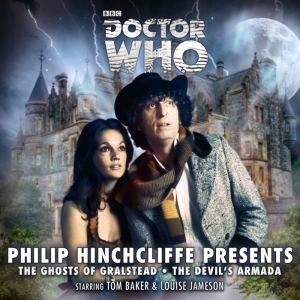 OK, this is a simple test to divide the Whovians from the Newvians.

I’m presupposing here that you can remember further back than cuddly little 10th David Tennant, or even (gasp!) before Russell T. Davies lent his talents to the revival of the series in this one.

Now, I don’t really care what era you first came onboard, or which decade or incarnation you originally hail from in terms of your entree into Who fandom.  Nor does it matter who your Doctor or companion(s) of choice may be.

Because regardless of all that, this is a comparatively objective question, relating to the overall quality of the production, the measure of the stories commissioned and produced and their overall consistency of excellence throughout.  If you will, the (cough) timelessness of the run.

Like I said, this should be really easy for any true Whovian.

What is the greatest era of Doctor Who?

All those who didn’t put their hands up for the Philip Hinchcliffe run, please exit the room.

OK, now that the Tennant noobs have left the room, let’s all breathe a huge sigh of relief and join together in an expression of communal joy.

Now it’s clear that productorial aegis steers and effectively directs the run over which those essaying said role have authority.  The wild divergences between and obvious signifiers of the runs of such producers as Verity Lambert, Barry Letts, Hinchcliffe himself, Graham Williams (and later Douglas Adams) and John Nathan Turner are perfectly apparent.  But one may wonder, what could the return of Hinchcliffe to the Big Finish iteration of Who imply, and what would he have to offer?

So here’s the deal.  Not having any huge backlog of unmade stories to tap into, the veteran producer has brought two stories whose approach and feel hearken back to the strongest of his efforts in conjunction with the storied Robert Holmes (who undoubtedly delivered his best work under Hinchliffe’s oversight).

Author Marc Platt (The Skull of Sobek, Cradle of the Snake, Butcher of Brisbane) explains that Hinchcliffe came to the table with fairly tightly drafted storylines complete with “a substantial amount of character details, tone and plotting”, to which he put the polish and finishing touches while adding some characters and flourishes of his own.

In other words, effectively, Hinchcliffe wrote the scripts.

Anyone out there still have any doubts about this man’s contribution to the most well remembered, strongly recieved and rightly celebrated run in the entire ongoing history of Doctor Who?  I didn’t think so.

“Look…the congregation of the stars…they are shifting!”
“Those aren’t the stars you see from Earth, Leela…we are looking down a portal into another part of the galaxy.”

Our first (and longest) tale taps into equal parts Talons of Weng-Chiang, Seeds of Doom and Pyramids of Mars.

With ghosts, realignments of the stars, deformed, brain-devouring alien tyrants and a mysterious artifact with the power to heal if not revive the dead, body snatching, freakshows, snake oil salesmen and mad doctors, there’s more science fiction tinged gothicism going on here than we’ve encountered since the man relinquished his post to Graham Williams (a few reminiscent Big Finish audio offerings aside).

There’s a great bit where Leela lets loose with a wild war whoop which is both great and hilarious, as Jameson really throws herself into the moment.  I’m sure the lemon tea and honey lozenges came out right after this particular sequence…

Hell, Leela even gets proposed to, though her suitor once again comes off like weak tea, if not a bit of a ninny, by comparison (come on, stated desire to protect her or no, he runs away from fights and even dies* whenever he does try to make a stand…)

* Long story.  Like several major characters in the story, he does come back to life pretty quick.

The story’s one major failing is that there are simply too many characters to keep track of, and too much going on for a single story.

The interweaved stories and plot threads of quite so many disparate personages, from the hunter and his amorally self aggrandizing medico brother to the childlike yet strangely knowing daughter and secret-guarding footman Mr. Hill through the tribesman cum royalty and his later developing situation back home in the Veldt, the sideshow medicine man with miraculous powers and even the sordid body snatchers and their seedy poorhouse running compatriot, there are far too many coincidental crossings of path.  Somehow everyone seems to know or relate to everyone else, until such point as they are no longer necessary plotwise, at which time they are killed off or simply dropped like a hot potato.

And then there’s the Moffattesque disregard for (and overuse of) death.  Sure, it’s a somewhat major plot point that a particular McGuffin in the story, if somewhat coincidentally, has the power to heal if not revivify.  But to have nearly every character in the story murdered at one point or another in the narrative only to be brought back within minutes comes off as a bit gratuitous if not absurdist.

Like its nigh-weekly analogue in New Who, this weird plot device proves more than a tad offputting and distancing, emphasizing a sheer and unshakeable comicbookishness to the whole affair, when it’s ostensible gravitas would otherwise merit a far more adult approach.

And mind, this is coming from someone who seriously enjoyed the whole affair… 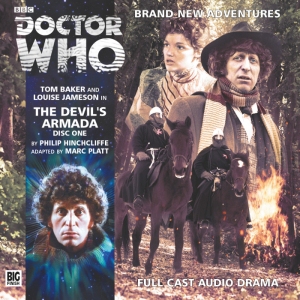 “Driver, I’m trying to provoke his satanic majesty, here. At least try and drive around the potholes!”

Things take a bit of an odd turn in the second story, The Devil’s Armada.

A bit too much of a historical for my tastes, this involves dumb villagers, burning witches (and Catholic “heretics”) and even a brief bit of adventure on the high seas with the Doctor and Leela facing off against the Spanish Armada.

There’s a little bit of SF thrown in as well, but it’s hardly The Awakening, much less The Daemons that we’re talking here.  It’s actually a lot more along the lines of The Visitation, though admittedly that’s hardly a bad thing as historicals go.

But in point of fact, this tale proves to be far more “historical” than “speculative” fiction, rather more in line with John Jakes than Dennis Wheatley, more Mark of the Devil than The Devil Cat.  And as such, like most of the straight (or nearly straight) historicals, The Devil’s Armada has somewhat of a tendency to fall flat under the weight of its own intrinsic driness.

On the plus side, beyond “Vinegar Tom” and the Stygian contingent, we get another fun moment where Leela lets loose with a rapier shipboard, and Jameson once again really gets into the swing of things here.

But on the whole, this sort of Robert Louis Stevenson by way of Nathaniel Hawthorne thing isn’t exactly my cup of tea, even with the Tom Baker Doctor and Leela livening things up a bit.

Even so, the Ghosts of Gralstead, for all its sheer overstuffed several-stories-in-one concerns, is one of the stronger Who stories we’ve been treated to in many a year, particularly if we’re limiting our discussion to the teleseries (as opposed to the generally higher quality of Big Finish’s audios as a whole).

In simpler terms, Gralstead may rank up there more or less alongside top of the line audio adventures such as Spectre of Lanyon Moor, Land of the Dead, House of Blue Fire, Night Thoughts, Shadow of the Scourge, …Ish, the Jago & Litefoot series as a whole and so forth, but Hinchcliffe and Platt’s effort blows pretty much every single televised script since Horror of Fang Rock right the hell off the map, with few if any exceptions.*

*City of Death comes to mind as one of the rarified competition, but otherwise?  Good luck.

And of course, above and beyond any particular merits of the two stories herein or their generally new to Big Finish (if apparently quite accomplished, to judge by the performances herein) guest casts, you get The Fourth Doctor Adventures’ Tom Baker and Louise Jameson, always and increasingly delightful together, particularly when matched with a pair of scripts truly worthy of their talents.

So.  Do I really need to tell you to go pick this one up?  Seriously?