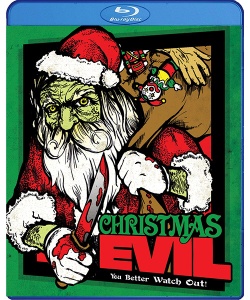 I can’t vouch for other folks, but once I got out of my early to mid teens, I just could no longer stomach all those crappy Rankin Bass puppet-fests, maudlin Frank Capra and Dickens “sentimental favorites” and all that bullsh*t about how wonderful it is to get the family together.  Please.

So when it comes that time of year, beyond old cheesy holiday themed variety show not-so-specials from the 70’s and the occasional public TV music bit recorded back in the VHS days, I find myself turning more and more towards the holiday themed horror.  And let’s face it, when you’re talking about Christmas, you’re probably talking good old fashioned 80’s killer Santa slasher film.

Sure, there were a few precedents in the early 70’s: the Joan Collins sequence from Amicus’ Tales from the Crypt, Bob Clark’s Black Christmas, possibly a long lost TV movie or two.

But the fact remains that it was in the early 80’s that this particular subgenre flourished.  Don’t Open Til Christmas.  The relatively long running Silent Night Deadly Night series, made infamous by a series of well publicized PMRC-style housewife protests.  David Hess’ To All a Goodnight.  Jake Steinfeld’s Home, Sweet Home (well, OK, that was Thanksgiving, but a holiday slasher quite that hilarious needs to be on this list).  Across the board, however cheesy the film, whatever its limitations, I love ’em all.

Well, there is one notable exception. 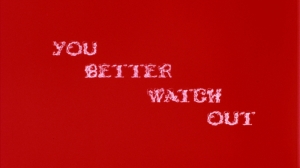 Lewis Jackson’s Christmas Evil was a staple at some local video stores back in their 80’s-90’s heyday, eventually making its way to DVD via first Troma and later Synapse, before getting the red carpet HD Blu-ray treatment from Vinegar Syndrome.

What I could never figure out was why. 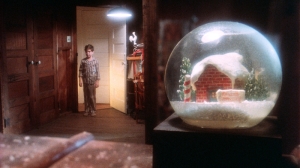 While still tapping into the standard maniac on the loose taking advantage of the season or holiday trauma-scarred loon lashing out in repetitive recreation and attempted exorcism of childhood demons, Jackson’s Harry Stadling (Brandon Maggart) is no witness to any sort of parental homicide or particularly horrifying and life shaking event.

Instead, he buries the memory of an oedipal primal scene, wherein he walked in on his parents getting jiggy with it on Christmas Eve (with dear old dad appropriately dressed up for the occasion as Father Christmas).

Sure, it’s kind of icky.  But honestly?  Whoop-dee-shit. 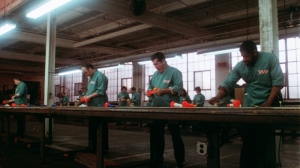 Rather than spending a few adult years on the therapist’s couch, Harry sublimates his holiday themed oedipal castration fears into taking on the role of father-‘Santa’ by working a menial blue collar job at a toy factory, decorating his flat in Christmas regalia and spying on neighbors’ children to see whether they belong on Santa’s naughty or nice lists.

Since he’s a bit of a soft touch (being more than a little soft in the head), his coworkers take advantage of him, getting him to work their shifts for them and generally having a big laugh on the dope – what the hell, he’s got no life anyway, right?

This is actually what cracks the guy and sends him on a killing spree.

Not revenge against those who scorned him.

No horrifying childhood trauma, at least not one that would result in more than skewing his sexuality towards an unhealthy deviance or compulsive abstinence. 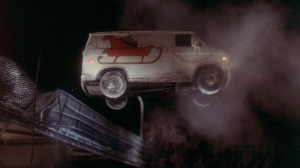 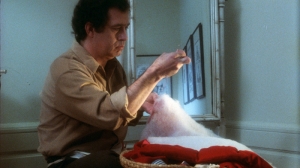 Vinegar Syndrome provides the film’s third DVD-era release (and if I’m not mistaken, first Blu-ray presentation), and for a no budget film shot in hazy soft focus, it’s practically revelatory.

Always looking like it was shot under cheesecloth and vaseline, Christmas Evil bore that awful hazy feel of the “family film” of its era, and perhaps that was even a deliberate choice.  But regardless of intent, it was an aesthetic error that left the film even harder to take than its own limitations already marked it as.  And while there’s really only so much you can do with a print, particularly at 30 plus years’ remove, the level of comparative crispness and visual information on display here are so much of a bump up from prior releases, it’s ridiculous. 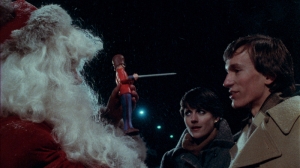 In terms of extras, you have your choice of commentary tracks, one apparently ported over from the prior Synapse release.  But anyone who may bear some measure of appreciation for this dubious masterwork will likely want to stick with the one featuring the celebrated connoisseur of cultural detritus himself, John Waters.  While I didn’t indulge myself, if anyone could make this stinker even vaguely palatable, Waters is the man…

You also get some interviews with Jackson and Maggart ported over from the Troma release, the latter complete with some clown dressed up like “Sgt. Kabukiman” throughout in typical Lloyd Kaufman fashion, and a half hour worth of screen tests from the actor selection stage.  Most interestingly, you get a selection of original test screening comment cards, most of which sagely agree with my opinion of Jackson’s opus magnus (albeit with even more vehemence).

While the film certainly looks the best it’s ever done, I can’t in any measure of honesty actually recommend this film, which I’ve found to be both depressing and fairly detestable from the first time I ran across it. 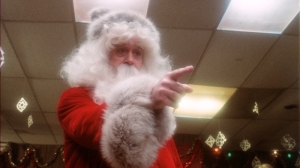 To be quite honest, having sat through it at least three times in my life and with all issues of transfer aside (and again, if you do like the film, this is certainly the iteration to pick up), I don’t merely dislike Christmas Evil, but actually hate this film with a vengeance.

Yeah, I know I’m being blunt, but thems the facts, kids.  The only real “Evil” this Christmas bears is that this particularly bleak, maudlin, unfunny semi-slasher exercise in schadenfreude appears to bear some measure of ongoing cult cachet…

Lacking both the campy unintentional comedy of most holiday slashers and just about all of their grim atmospherics, Christmas Evil is practically a Lifetime TV drama with a few murders thrown in for good measure, and as such remains an unworthy inclusion to a far more entertaining pantheon.

And when said pantheon includes things like the brain in a fishbowl killer Santa vs. metalheads of Silent Night Deadly Night 3, that’s really saying something.