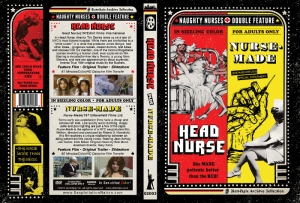 Leonard Kirtman, the part time producer (and full time cab driver!) responsible for the entertaining no budget Something Weird double bill Curse of the Headless Horseman/Carnival of Blood and Vinegar Syndrome’s eerie Death by Invitation resurfaces with a lowbrow oddity of a different sort, bankrolling director Tim Davies’ Head Nurses. 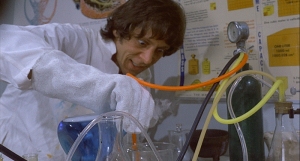 “Mr. 10 1/2” Marc Stevens dons ladies gardening gloves and a lab coat spattered with some very feminine Springtime shades of robins egg blue and egg yolk yellow (!) to fuss madly over test tubes for a minute or two.  Then a pan and zoom across a black and white photo of three slutty looking nurses (one of whom is a dead ringer for Louise “Leela” Jameson, of all people*) introduces a batch of further onset stills photos, each of which gets the pan and zoom treatment.  Throughout all of this low rent nonsense, a fourth rate 60’s garage band offers some extremely sloppy guitarwork and the opening credits roll…

* even more amusingly, this actually turns out to be a young Andrea True, of disco favorite “more, more more” fame (!) 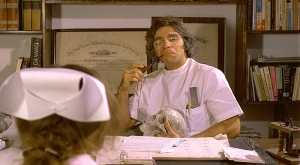 A mustachio free Harry Reems camps it up wildly, doing the exact same schtick he used for the same year’s Deep Throat as a hiring doctor with some unusual ideas about recruitment.  This is crosscut with 2 nurses pretending they’re on the isle of Lesbos, Stevens doing weird things with a skull and a housewife type getting it on with some hippie.

And I mean crosscut Laugh-In style, with bits and bobs of random on set conversation, scripted dialogue and goofy banjo music interrupting each other every few seconds.  Worse, this contrived cut-up “zaniness” continues throughout the entire hour long running time…

Suffice to say, if Lumpy Gravy is your favorite Frank Zappa album, this one’s for you.

The companion piece is, comparatively speaking, a masterwork of modern cinema…because just about anything short of The Telephone Book would be!  But trust me…that’s not saying much. 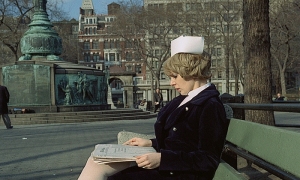 Robert Mansfield brings us Nurse-Made, a post dubbed, nigh-Doris Wishman epic of early 70’s New York cinematic sleaze and cheese which travels between vintage East side street scenes to a single dingy, sparsely furnished apartment room whose interior decorator had to be colorblind…and that’s the full extent of the sets and location, right there.

Complete with random shots of feet, relatively intensive focus on bits of tacky decor, wild gesticulations and mouths that don’t move while the character in question is speaking, this is very likely the closest to Wishman you’re likely to encounter outside the lady’s own jaw dropping oeuvre.

You even get the grossout factor (ala Wishman’s Chesty Morgan films or the Amazing Transplant/Let Me Die a Woman surgical footage), as the entire “plot” revolves around a munchkin faced, enormous foreheaded geriatric retiree pretending to have a heart condition and bamboozling his “victim” in such a way that he can endlessly screw what looks like the same pudgy housewife from Head Nurse.

Then for the second half of the film, we get treated to both the nurse and the old coot getting it on with a positively frightening fat girl (think a live action Petunia Pig) with Chesty-worthy breasts.  I mean, short of tacky silicone surgical enhancement, this size only comes one way, and that’s with a direct match in proportion.  So expect some doorway-challenging enormous hips and a truly sizable waistline (particularly for the era!).  The long and the short of it is, this is one thick woman we’re talking about here…

Oh, and if you haven’t spit up your lunch yet, did I mention the film is (just this side of) softcore?  Sheesh… 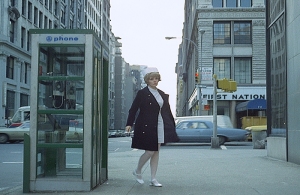 Distribpix did it’s usual excellent job of remastering what certainly had to be some grotty, splicey old grindhouse adult film theater prints into ones that look vibrant enough to eat off the floors of (not that I’d advise anyone to do so!), and I guess it’s nice to see Stevens, Reems and Leela…er, True looking so young.

But that’s seriously about all I have to offer here – these films make Carlos Tobalina look like Howard Hawks by comparison. 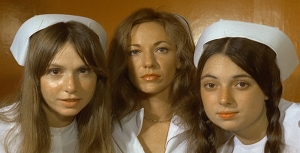