Another four months, and you know what time it is (pun entirely intentional). 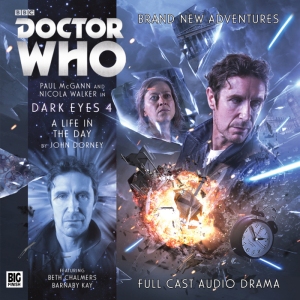 The Doctor brings much embattled companion Liv Chenka (Nicola Walker) back to turn of the century London in search of Molly O’Sullivan.  While he hooks up with a certain Kitty Donaldson (Beth Chalmers), The Doctor leaves Liv to the tender ministrations of her war wounded brother Martin (Barnaby Kay), who teaches her the importance of moving on from mourning to actually live.  And everyone takes in a Buster Keaton picture!

But someone is tracking them both, and Martin turns out to have a greater secret, and greater connection to Liv, than may at first appear…

“I spent so long struggling to survive, that when I did…”

“You forgot to live…I felt that if I spent the smallest amount of time enjoying myself, that it was a betrayal of my friends, of everyone I’d lost…they wouldn’t want that.  They wouldn’t want me wasting time dwelling on the past.  Living well is the best way to remember them.

I wasted so much time, sat there in my room, doing nothing.  I should have been out here, living.”

A nicely period-evocative character piece, John Dorney’s A Life in the Day gives Nicola Walker a chance to expand her emotional range beyond Liv Chenka’s standard embittered, war-grizzled leather skin to a point where the character finally appears human.  To hear her heartfelt discussion with Barnaby Kay’s Martin Donaldson turn towards a sort of relieved, almost girlish laughter hints at a development in leaps and bounds for the generally one note character, with potential for a more well rounded and developed Liv Chenka in the future – Dark Eyes authors take note!

For his part, Kay manages to deliver a dual tonality, as ostensibly light hearted and gay (in the sense used in the period setting, rather than its more modern connotations) and fatherly-romantic in his affections and concern for Liv as he is with the more shadowy and haunted side he partially reveals and partially hides from her, to the level of willingness to repeat one single day with her over and over again (albeit with slight variations as compensation).  It’s a romantic sentiment, and reveals levels of human interaction and relationship that in the hands of a lesser actor or scripter could take years to develop or properly evoke.

While The Doctor himself takes a decided back seat this time around and there’s little ostensible “adventure” to be had in the explosion filled wartime schmutters Dark Eyes (and for that matter, New Who) tend to gravitate towards, A Life in the Day is a wonderful chamber piece that leaves supposed “greater” symphonies of action and destruction decidedly pale by comparison.

What does Favreau’s showgirl/muse Adelaine Dutemps (Rachael Stirling) have to do with all of this?  And what is the strange secret of the titular Monster of Montmartre?

Retaining the comparatively relaxed, more versatile characterization established in the prior episode, Nicola Walker continues to move away from her earlier hard bitten persona, making first tentative steps towards becoming a proper companion in the sense of the earlier Eighth Doctor Adventures such as Charley Pollard, Lucie Miller, Tamsin Drew or the short lived but quite delightful Mary Shelley.  As before, it’s a welcome change, with even a touch of snark to her sendoff of Legrand and his indecent proposition…

McGann gets to move back to a far more central role here, shifting from a likeable companionability with Favreau to an appropriate disaffectedness and barely controlled temper towards the exploitative Dutemps and finally the man of action to which Dark Eyes listeners are well accustomed in the final third.  As always, it’s a true pleasure to hear his laid back tones and warm demeanor in the role, making one pine for a theoretical longer (and perhaps better concieved) televised iteration for his particular take on The Doctor, way back when.

Sadly, after another all too brief if atmospheric location and period setting, author Matt Fitton allows matters to devolve into some overly-typical territory for the Dark Eyes series, bringing some omnipresent villians back into the fray once again.

While the leads and the Parisian characters enliven the end result more than usual for stories featuring the absurdly recurrent baddies (whose identity I’m sure regulars can easily divine), the bottom line is that it is yet another in a rapidly increasing lexicon of their tales, and this listener, for one, could stand to do with a sight less of these particular nasties’ appearances – there have been far too many recorded on televised, celluloid or audio formats since 1963 already. 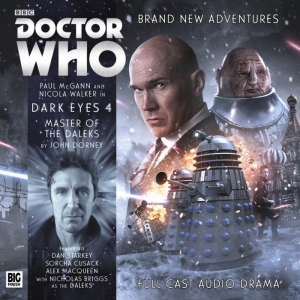 “Can you have Dalek foot soldiers, isn’t that a contradiction in terms?”
“Don’t be facetious, my dear.”

And here’s where things get dead obvious, when author John Dorney brings us Master of the Daleks.  The Master and the Daleks have allied themselves once again, to fend off…the Sontarans ?!?

Dan Starkey (the loveable Strax from New Who) and his Sontarans vs. Nick Briggs and his Daleks and Alex Macqueen’s Master, with the Doctor playing monkey in the middle.  A fanboy’s wet dream, to be sure, but how does it stand for those of more discriminating tastes?

“Ahh, here we are, my home away from home.”
“You need to sack your interior designer.”

Alex Macqueen’s showy, histrionic and often amusingly fey take on The Master continues to grow in nuance and likeability, with more witty asides and one liners per scene than you’re likely able to keep track of.  Briggs pulls in vague elements of Terry Molloy and Michael Wisher’s Davros for his Dalek Time Commander, more questioning and – gasp – dare we say it? nuanced than typical for the one note shrieking fascist hate machines.

And of course, while somewhat sidelined in the busy proceedings, Starkey’s Sontarans are as stuffily (if perhaps unintentionally) amusing as ever.  But in the end, it’s really all Macqueen’s show, and he grabs the spotlight with a death grip to make the most of the opportunity.

“Thank you, human.  You have brought my ignominious imminent death closer to hand.”

Dorney delivers a particularly sassy script that plays up the character interaction (literally everyone in the cast gets not only their moment in the sun but at least one memorable one liner for their participation) over the apocalyptic doings and expected battleground nonsense* and we even get a surprise former companion on hand.  Go ahead, check the cast list, you likely won’t figure this one out till you get there…

*though sadly, that sort of thing does appear in the final quarter in the form of an endless, if frequently backgrounded, Dalek vs. Dalek vs. Sontaran battle sequence.

In terms of pure scripting, Dorney’s Master of the Daleks actually emerges as the winner in this box set of adventures.

While obviously lacking the warmth and human honesty of the same author’s A Life in the Day and being forced to resort to the expected mayhem towards the end, for the greater part of the proceedings, there’s a level of insouciance and wit on display that calls to mind such forbears as Cole Porter or even Oscar Wilde.

No question, even evoking such comparisons constitutes one hell of a stretch, but it’s that sort of seldom-heard style and degree of rapid fire, jam packed wryness that keeps the listener truly on their toes just to keep up.  Hats off to you, sir. 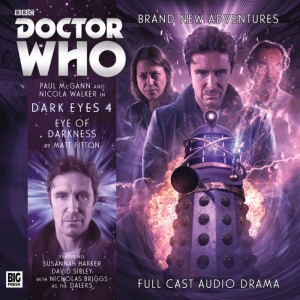 “There are no Daleks on Orion.”

Finally, The Doctor is reunited with both Tardis and companions in Matt Fitton’s Eye of Darkness, which takes them to “the most tranquil place in the universe”.  But is this restorative retreat all that it seems?

Eye of Darkness brings things back into more standard Dark Eyes territory, involving Dr. Shriver, the retrogenitor virus and the birth of The Eminence, the Time Controller vs. the Dalek Supreme and the Daleks against an embittered resistance cell leader (Susannah Harker) with The Doctor, Liv and that companion from the prior episode trying to work damage control between them.  There’s even a grand dramatic sacrifice at the end, which should make New Who fans instantly flash on Rose.  It’s all far too explosion filled, warfare based, edge of the seat last minute alliance swaps and syrupy dramatic bombast for my tastes.

In the end, this series of Dark Eyes pulls in a few elements of what made predecessor The Eighth Doctor Adventures work so well, which points to a more hopeful direction for future McGann Big Finish stories (whether continuing under the Dark Eyes banner or no).  It would certainly be nice to see him restored from his de facto shunting into an ersatz predecessor to New Who’s War Doctor into the more gothic romantic figure of his earlier Big Finish appearances, particularly in the less Harlequinized take of the post-Charley era.

But either way, it’s always a pleasure to hear the man himself, and both Nicola Walker and Alex Macqueen show noticeable character progression here, so there’s a strong chance that whatever form the Eighth Doctor’s future adventures take, it should be an interesting one, a direction less inclined to the intrinsically rote repetition of all the Dalek vs Eminence vs Master (and so on) schmutters the Dark Eyes line has been based around.