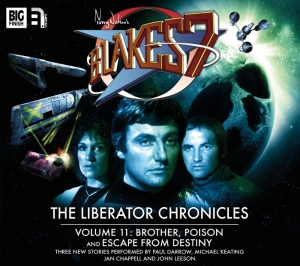 “The Federation clamped down on most religions, most pressure groups hard and fast, but not the One Pure Race Organization…not a group that was sowing unrest, spreading hatred.  Not a group that would do some of the Federation’s dirty work for them, make them look mild and reasonable by comparison.”

And with that unsubtle metaphor for a number of very visible contemporary right wing political groups (cough Tea Party cough), Nigel Fairs kicks off a two person character piece between Paul Darrow’s Kerr Avon and a Federation sleeper agent whose cover story reprogramming may have worked just a bit too well…

Avon relates a tale of his sordid past, where he and fellow O.P.R.O. agent Rickson pull a Watermelon Man (or Soul Man, for relatively younger viewers) in a faux mission to cure the virulent Hojer’s Syndrome…a disease created and disseminated by the O.P.R.O. themselves as a tool for galactic “cleansing”…and which they further intend to “cure” by any means necessary.

“It took the riots to make me understand.  Normal, civilized people, my friends, my colleagues, burning down houses, stoning people in the streets just because they had a disease.  They changed overnight from intelligent, rational people into bloodthirsty animals…all because of their fear, their ignorance.”

Pulling in commentary about 1980’s era fears and misconceptions about the AIDS epidemic (and to a lesser extent, more modern pandemics such as SARS and ebola) to a much broader statement about prejudice and the passing down and perpetuation of bigotry, Fairs shoots some poignant arrows at multiple targets, managing to hit a few bullseyes in the process.

Always the most political of narratives, Blakes 7 provides ample tools for the interested author to make a worthy and timely statement about contemporary woes, and Fairs makes ample use of it herein. 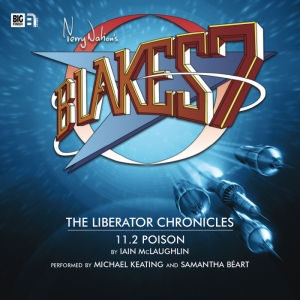 “I’m not a hero.  Never wanted to be one.  But some things are worth taking a risk for.”

A Federation freighter heading to a farming colony bears a sideline in human trafficking…and genetic experimentation.  And Vila isn’t the only outside agent infiltrating the crew under cover…

A fairly ephemeral but entertaining character piece*, Iain McLaughlin’s Poison seems specifically tailored to allow Michael Keating his full share of the spotlight, even hooking him up with an (ostensibly) very interested distaff companion.

* sure, it turns overly serious in tone towards the end, but whatever.  It’s really just the early part that matters in the end.

Samantha Beart (Vienna Series 2) delivers a particularly flirtatious (if predictably scheming) femme fatale, Keating is his ever-loveable, eubellient self, and that’s about all there is to say here before moving on.

I enjoyed it, particularly in its more light hearted, neo-romantic comedy first half. 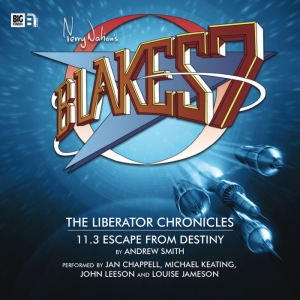 “I couldn’t believe it.  There were dozens of them, all cheering this Federation lot.  Applauding.”

Finally, Jan Chappell teams up with Keating once again, for Andrew Smith’s Escape from Destiny, which finds them responding to a distress signal on a frontier planet beset by an imminent Federation invasion.

“They were Federation troopers in disguise.  I didn’t believe it at first, or I didn’t want to…it seemed so extreme, even for them.”

“So the Federation stopped your food supplies.”

“Even with rationing, we struggled to feed everyone.  Before long, there was an almost total breakdown of law and order.  Nowhere was safe.  People were killing for a loaf of bread…citizens flocked to the cities looking for food and security…we’re living under martial law.”

“All caused by the Federation.”

With manufactured “crises” providing excuses for hyperinflated bubble economy prices set to a “market sustainability” paradigm rather than fair value cost of production, transport and marketing, food, heating, electricity and even medical care prices have spiraled out beyond any realm of logic, leaving even the ostensibly “wealthiest” nations filled with a newly emergent serf class, the impoverished, the overworked and underemployed, the obese, depressed, illness prone and desperate comprising the greater part of the general populace rather than the exception.

And it’s all about concentrating all the wealth and power in the hands of a “privileged” (read: politically connected) few, manipulating global economies like puppets dancing to their every whim.

And the people remain distracted, fearful and silent, under the all consuming fear of one imaginary, manufactured “threat” or “crisis” after another, attacking their fellows and living dog eat dog in a self-destructive Social Darwinism, as the rich and powerful “SuperPACs” laugh and fiddle while our modern day Rome burns.

The fact that Smith understands this, and moreover dares to broach the subject, says more than my spelling it out here for you can.

I could go on about the quality of the performances, but the actors and actresses involved have well proven track records, and this is more or less understood at this point.

I’ll even interject a lighter note, postulating that Blakes/Who crossover veterans Paul Darrow and Colin Baker meet once more in a future Blakes installment – whether some form of homage or reprise to Bayban the Butcher and Tekker or a more subdued note being irrelevant.  Let’s just see it happen, hmm?

But in the end it all comes down to this.

Make no mistake, right here and now, in this day and age, we are in a battle for our collective and individual well being – health, freedom, finances all being put at risk if not directly heading for the chopping block, as we collectively sleep, content to let televised fantasy and autotuned pre-verbal gibberish “music” carry us through ever more desperate days, filled with more debt and inner sorrow than man deserves to bear, while those in power laugh.

Listen, read, understand, and more importantly, take appropriate action while we still can.  Because darker days are coming, and the collective inaction of the rational among us can only serve us ill…and even more terrifyingly, sooner than not.