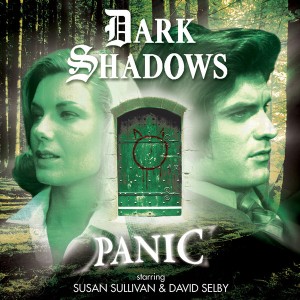 Much ado about french toast: Big Finish follows the episodic miniseries Bloodlust with a rather odd return to the ongoing series.

During a rather lengthy domestic scene wherein Quentin Collins makes breakfast for the prematurely aged (and similarly werewolf-cursed) Tom Cunningham, the subject of Quentin’s former wife comes up.

Yes, apparently Quentin has taken to playing Lovejoy after a fashion, and he’s in possession of an old 78 whose tune seems to be running through both Quick and Goodman’s heads of late…

“Experience has taught me, Professor, that not every mystery needs to be solved.  Sometimes if you spy a sleeping wolf, it’s best to walk right past.”

Boy, wishy washy Goodman sure manages to hop into the sack with sardonic shopgirl Holly Arbour (Alexandra Donnachie) rather easily – not to mention quickly, doesn’t he?  It all winds up in an old fashioned tale of a deal with the devil (or a related pagan equivalent) and how to weasel out of it…

Wow, talk about marriages of convenience!  While amusingly (and perhaps even likeably) nasty, Sullivan’s sharp-tongued shrew of a bookish intellectual is some piece of work, that’s for sure.  Shakespeare would have devoted an entire play to a character like this…and in fact, already did.

But before you can shout “kiss me, Kate!,” it’s all over, and we’re back with Quentin and Tom at the breakfast nook.  And boy, is he surprised when the lady of the hour drops in…

“That’s Lela? She’s nothing like you said…she’s not scary at all!”

Michael Shon continues the child in a man’s body thing he did so well in Bloodlust, dropping unintended non sequitors and naive bon mots, with Selby retaining the resigned warmth and tolerant bemusement he showed as Tom’s de facto father figure in the earlier series.

By the denouement, even Sullivan actually displays a softer, more affectionate side that casts some light on why the two hadn’t immediately flown down to Vegas for an equally quick divorce, so prospective listeners can remain assured that casting is in good hands across the board this time around.

While ultimately a bit of a head scratcher plotwise (if this all relates to Ms. Quick, what was the significance of the 78, and thus the invovlement of Quentin and company in the first place?),* this is still a decent installment of the returning Dark Shadows line, and worth investigating if only to see what sort of life and backstory author Roy Gill is able to build around what appears to have been a throwaway one off guest character.

* An answer of sorts is provided, but it feels rather a flimsy one, something of a convenient plot device to get all of our cast of characters together and set matters in motion.