Joy N. Houck Jr. (Creature from Black Lake, Night of Bloody Horror) puts my personal favorite Monkee (and father of teenage lust object Amy Dolenz) Mickey Dolenz and Chuck Patterson (of the 1979 film version of Hair) in harms way in The Night of the Strangler.

A sordid little early 70’s no budgeter, this is the sort of horror film they used to show on NYC syndicate TV back in the 70’s and 80’s – grotty little regional drive in oddities like Dear Dead Delilah (itself long overdue for a DVD release, hint hint), Twisted Brain or Silent Night, Bloody Night.

Suffused with an uncomfortably intimate, surprisingly claustrophobic feel, the film boasts zero actual strangling (making its title something of a bizarre misnomer), but several murders by drowning, sniper rifle, snake (in a bouquet of flowers, yet!) and even a spring loaded knife in a car seat (!) 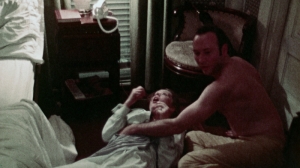 Eventual 80’s TV bit player James Ralston stars as a ratlike Southern racist who just can’t deal with the fact that his little sister is undergoing a shotgun wedding to the (black) man who knocked her up (they do seem to be in love in their one scene together, in case anyone is wondering).  Dolenz is the younger, more consciousness-raised brother who seems to get pushed around pretty easily for a Vietnam vet, particularly given their racist older brother’s scrawny lawyer’s physique.

Ralston spouts off slurs left and right and steals Dolenz’ girlfriend right out from under him (later dialogue reveals it was likely their mutual xenophobia and hatred of other races that brought them together, so no loss), while beating both of his siblings around with impunity and abusing his longsuffering (and yes, black) groundskeeper Willie (Warren Kenner).

Only (black) Catholic priest Patterson (who doubles as little sister’s short lived beau Jake) seems to be able to keep this neo-Ted Nugent in line, and it’s the efforts of (very Sicilian) cop Lt. de Vivo (Michael Anthony) and his partner Jim (Harold Sylvester…who by the way, is black) that matters come to a head…albeit too late to help the many characters fated to suffer an imminent demise during the Night of the Strangler. 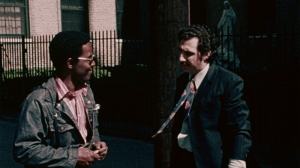 Dolenz comes off as likeable enough, particularly when contrasted against the sleazily offensive racist played by Ralston, but is a bit too overanimated if not whiny in all his heated protestations.  And again, Vietnam vet getting slapped around by a scrawny lawyer?  Pull the other one…

There’s a neat twist at the end that puts a questionable spin on any otherwise progressive intentions, and all the baddies get their just desserts in the end…though in tried and true 70’s style, there are no real heroes, and nobody gets a happy ending. 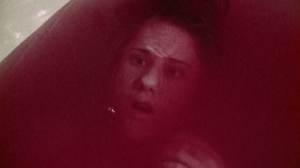 The film quality is beyond questionable, pockmarked with omnipresent grain and soft focus throughout, but the picture itself is enjoyable enough and worthy of a place (however lowly) on any 70’s drive in film fan’s shelf.