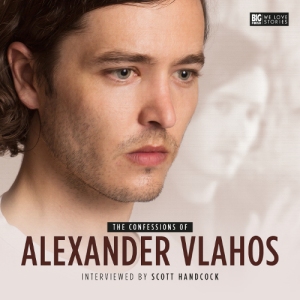 Fans are doubtless well aware that this coming October will bring The Confessions of Dorian Gray to an end.

As a sort of early sendoff, following the double hit of Series Four and Spirits of Christmas over the last month or thereabouts, series creator Scott Handcock sits Alexander Vlahos down for a loose and informal chat about his start with Big Finish (doing Gallifrey), his subsequent appearances in Bernice Summerfield and of course the inauguration of the series itself.

As a relatively young actor (Vlahos speaks of just graduating university and costarring in one theatrical production before he was picked up for the Gallifrey role), there’s not the sort of breadth and depth of history listeners encounter in the earlier Tom Baker and Colin Baker chats – in effect, it’s all about his time with Big Finish, and the vagaries of production throughout the Dorian series per se.

It’s interesting to discover how especially off the cuff the development of Dorian actually was, but there’s really not a lot to discuss here – the chat, unlike the oft multifaceted subject thereof, proves a reasonably straightforward endeavor.

A sort of extended behind the scenes, this one will primarily appeal to hardcore Dorian series fans, though it must be said that it was nice to hear a more relaxed, less particularly brooding and gothic side of that husky, oversmoked voice – or if you prefer, a taste of the the real man lurking behind the role.