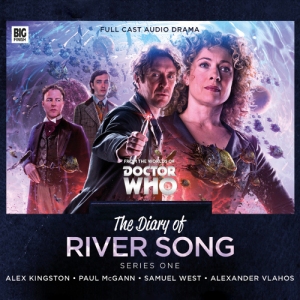 A particularly bristly and distracted River Song has travelled back to early Jazz Age England to immerse herself in the world of archaeology.  But she’s awful reluctant to do any actual digs…

“I think you’ll find I’m not your manservant.”
“Oh.  I barely had you marked down as a man at all.”

Called into action despite her reticence, she proceeds to spew nastiness at every male within hearing range, inclusive of shipmate and impromptu sidekick Bertie Potts (Dorian Gray’s Alexander Vlahos), a consulate valet who’s up for a bit of adventure himself.

But Bertie’s got a secret or two up his sleeve, and there are some homicidal bees and a mutation bedeviling those who’d explore this particular ancient burial ground…

Is anything really what it seems?  And is all of this some grand test for River Song?

Vlahos provides a likeable nebbish of a sideman, and Kingston certainly throws herself into her acting – unfortunately, Jenny Colgan writes the character in a manner that comes off quite offputting.

Impatient, nasty, brimming with putdowns (particularly against the many males that surround her)…at best, Professor Song can be described as “difficult”.  It’s a strange choice, and not really what I picked up from her appearances on the teleseries.

There’s a lot of business about being unloved, if not abused.  Bertie makes a comment that really rankles about never being touched except to be beaten; Prim has issues of abandonment by a mate (not to mention discussions of outright torture), it’s all quite bristly and overstated.

Thankfully, Vlahos’ winning performance and Kingston’s sheer exuberance at putting her all into this combine with the turn of the century British archaeological setting to keep things entertaining enough regardless – and perhaps despite authorial intent, given all the overemphasized subtext!

Then Justin Richards brings River to a Marvellous Party, where she catches up with Bertie and discovers a very human robotic waiter and a Sims-style civilization planetary manipulation going down between the champagne and hors’d’ouevres…

But when one of the would-be “elite” winds up murdered, some rather uncomfortable truths are uncovered…

“We’re toys to the people here, our whole planet.”
“It’s a complex skill…knowing when to nudge and how far, when they should discover fire or the silicon chip.  How the markets should fall.  Who should win a particular election.”
“And that doesn’t strike you as being at all wrong?”

Ah, that’s more like it.  A far more recognizable River Song, righting wrongs and giving the two finger salute to the establishment.

Just about everyone involved (short River and Letty Butler’s Spritz) is a right bastard, and thanks to our heroine’s involvement, free will, independence and basic human rights are fought for and indeed won in the end.  Cue applause and a huge sigh of relief after that odd mischaracterization in The Boundless Sea.

Next up, James Goss shows us some Signs, where I guess you could say River meets her husband for the first time.  Or is that the last?  A certain Mr. Song (Samuel West) drops by, just in time to say goodbye to his radiation-riddled significant other…

“I wonder who’d I have been if I hadn’t met you.”
“Well, still brilliant…”
“Obviously.”

West offers a reasonably familiar take on The Doctor, with enough recognizable elements to offset the strange and new.  In fact, one big secret and a touch of Capaldian bristliness aside, he’s actually quite likeable.

Kingston presents a River whose sheer force of will belies and defies her terminal condition, showing a hell of a lot of fight for someone who should be getting all maudlin in some tawdry hospital drama sort of thing.  It’s a nice touch, and very much in keeping with the character.

Finally, the Paul McGann Doctor shows up to face off with Bertie, Isabella (Imogen Stubbs) and the rest of the would-be world shapers in Matt Fitton’s The Rulers of the Universe.

“You seem to be some kind of super rich “elite” with a penchant for remote control of planetary systems, calling yourself, with an astonishing degree of hubris, “The Rulers”, am I wrong?”

As expected, these folks are out to make a profit at all costs, and corral The Doctor into doing their dirty work for them: seeing if it’s possible to take over and monetize the Sporeships.  But River doesn’t take kindly to their manipulation of herself…or worse, her husband...

McGann is his ever loveable self and Kingston is positively on fire this episode, taking neither prisoners or shite from these fascistic “master manipulators” or their misguided business venture with some very ancient and cold blooded transdimensional entities…

Alexander Vlahos manages to shift from likeably bumbling to effete and elitist to outright villainy over the course of four episodes here – an impressive display of range.  McGann and leading lady Kingston offer their usual strong level of performance, and given her comparatively brief aggregate screentime on teleseries Who, this may even be something of a defining moment for her portrayal of the character.

In sum, The Diary of River Song is decidedly a case of some rather strong actors (and actresses) driving the quality of a story above and beyond what the scripts per se, however respectable, would otherwise merit.

Fans of Kingston (and for that matter, Vlahos and the briefly appearing McGann) should be quite chuffed by this one on the whole.