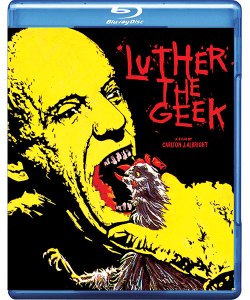 What amazes me most is that this is from the same guy who gave us The Children, an enjoyably spooky if bucolic 1980 bit of business whose trailer scared the crap out of me as a wee one.

Perhaps it can be explained by the fact that while Carlton J. Albright was in fact the writer of that earlier opus, he was not its director.  But who the hell knows.  The fact is that Albright only wrote two films and directed one…and guess which one of those Luther is.

Now, I’ve heard accusations thrown at the slasher film for decades, many of which have some undeniable truth to them, about the cardboard cipher characters and general eschewing of not only character building, but plot development and scripting in favor of the rollercoaster thrill ride sensationalism of the funhouse, the “horror” of the jump scare and the shock of grue. 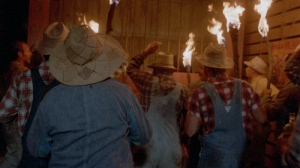 In place of audience identification with recognizable onscreen people whom the viewer therefore shows emotional attachment and concern for the fate of, the authors, and by extension consumers, of such cinematic efforts eschew such connections in favor of “body horror” and the “lure of the forbidden image” of human bodies treated as slaughterhouse carrion and eviscerated in a succession of “inventive” and presumably heretofore unseen manner(s).

But yet and still, arguments, however specious, can be made in defense of many of these films, particularly by comparison to later, more obviously exploitative and less developed efforts (such as the slashers of the post-Scream revival), with their ever-more hateful and increasingly motivationless characters encouraging viewers to root for the killer and give these reality TV wannabes an existential comeuppance of sorts.

The same cannot be said of Luther the Geek.

Strangely much beloved among the online community, Albright has crafted what is certainly one of the earliest examples of the sort of mindless murderfests (and pointless remakes) that would come a decade or so hence.

With a motivationless, wholly repulsive lead character whose entire backstory is that he seemed to idolize the local carny geek after one night’s “performance” – somehow this leads him to communicate solely in chicken clucks and go around murdering everyone he meets – Luther the Geek is cinema of the lowest order: even SOV (at least in its 80’s-mid 90’s heyday) tends to have more of a (hold your breath) likeable aura about it, and arguably more well developed characters! 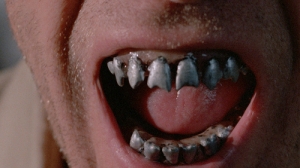 So Luther somehow goes from liking the backwoods geek show to, we’re told, a number of murders, only to be let loose on society by a presumably well meaning if obviously quite delusional lawyer type (or maybe she’s his shrink, who knows – her big scene’s all of 3 minutes tops).  Within seconds, he’s out there murdering old ladies at bus stops and pulling home invasions, one of which is where much of the running time unravels.

Seriously, unless you’re desperate to see a few scenes of (admittedly fairly extreme, particularly for its era) grue, there is absolutely nothing to recommend this hunk of celluloid detritus outside of the lovely (and extremely busty) Stacey Haiduk, who took time out of her ongoing role as Lana Lang on the wholesome Midwestern value-ridden Superboy TV series to strip off, shower with and bang her butt-ugly boyfriend (Thomas Mills) while her mother (Joan Roth) is tied up and gagged in an adjoining room (she doesn’t know this, of course), before spitting up blood in the middle third.  I’m sure fans of the series would be proud.

Luther kills Haiduk and Mills, the local cop (Jerry Clarke) drops by and there’s a ridiculously drawn out final act where he tries and fails to take the baddie down before our surprisingly overage “final girl” manages to do the deed. 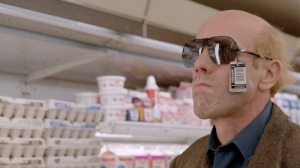 I’ve seen some foolishness about how this “wonderful” main character somehow “elevates” this film above other slashers, but that’s not only absurd, it’s a literal mirror universe statement.  Buddy Bacon from Slaughterhouse was a more likeable and amusing slasher, by a longshot. This freak (Edward Terry) is just Chris Elliott crossed with the simplemindedness of Ernest and the irritation factor of Adam Sandler.  And that’s painting a much more nuanced picture than Luther even deserves.

I don’t know if Vinegar Syndrome intends to release an upgrade of the old Troma disc for The Children, but that would be a very welcome addition to the collection.

Luther the Geek?  Not so much, and that’s being nice about it. 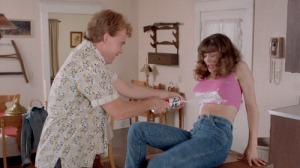 the only reason to see this film…and her ugly BF

Some extras are ported over from what I’d have to imagine was the old Troma disc (helpfully separated in the bonus menu as “old extras”), essentially consisting of brief interviews with Albright and his son Wil (who was “little Luther” in the opening backstory), with another, slightly longer Albright interview split into his answers to a given question about one or the other scenes in the film.

The “new extras” include a quickie introduction from the director playable before the film (where he curses out the original distributor – and no, it’s not Troma), a director’s commentary track for those so inclined, a new 6m interview with Albright and a 10m one with trooper Jerry Clarke.

Certainly, if this film is on your bucketlist of no-grade (and no-plot) cinema you’ve been desperately clamoring for a Blu-ray upgrade of, this is the package you’ve been praying for, complete with extras.

For the rest of us…not so much.

one more gratuitous shot of the only good thing about Luther the Geek.