Sometimes you just have to wonder.

I mean, the DVD industry is notorious for its battlefield worth of worthy “boutique” labels, who come seemingly out of nowhere, drop a surprising and often quite impressive roster of varied releases of note…only to suddenly go under and fade into obscurity.

Both the anime and cult horror industries are notorious for this – to list the sheer volume of once much beloved and often quite essential labels who’ve either long since shut their doors or who hang on by the slimmest of threads with absurdly pared down rosters and the rare current acquisition (I’ll refrain from naming at least six labels that come immediately to mind so as not to arouse their indignant, if unjustified in the face of the facts, ire cough like Grindhouse cough) would be a pointless exercise in looking backwards to a much better time for cult film fans, a decade or less past.

And just try getting yourself some of their out of print releases (many as recent as 3 years discontinued!) and you’ll see how absurd the gouging is on the second hand market. Good luck stocking up on classic 80’s-90’s anime, for example…

When a current label announces the reissue (and often remaster/upgrade to Blu) of one of these long lost titles, it really depends on where your own personal collection stands.  Were you one of the many who grabbed a given title on prior release, leaving such re-releases and restorations something of a yawn inducing matter?  Or were you one of the many others who were either too young, too broke or too busy chasing other areas of the once-burgeoning market for cult cinema on DVD to catch the title in question, leaving you as one of the panting and excited pre-order patrons of same? It’s all relative, really.

But with quite so many “holy grails” of cult film not only still unreleased in the market, but so highly (and overly) valued by resellers, it’s always a bit of a slap in the face to see something still readily available, rarely discussed and which garnered precious little excitement on the fan/collectors market the first time around dropped on us.

It tends to leave the prospective buyer nonplussed if not stunned. Really? All those hard to find, hundred dollar range plus films and releases to choose from, and they’re reissuing something this yawn inducing, easily picked up for the price of two “venti” cups of Starbucks?

And so we come to one of this month’s releases from Vinegar Syndrome, the 1985 Mardi Rustam oddity Evils of the Night. 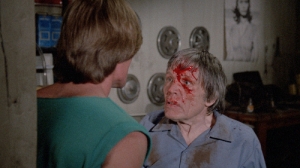 It’s amusing in concept, entertaining enough in a tongue in cheek junk film/cult sort of way…but was anyone really clamoring for this easily available, not all that special release to get a restoration and upgrade? 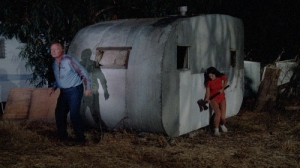 The Shriek Show DVD runs 1:24:43, and comes more or less bare bones, with only a trailer to its credit in any real, practical terms. The print is acceptable, if a bit dark and slightly muddy given all the night shooting involved.

Vinegar Syndrome upgrades to a 1:25:10 widescreen, cleaning things up to nigh-crystalline quality (for a film of its vintage and shot on the budget and film stock that it was – there’s still heavy grain and speckling visible at times, mainly in night scenes) and beefing up the color contrast considerably. It’s exactly what you’ve come to expect from the folks at Vinegar Syndrome – a meticulous, quality restoration of a film that really doesn’t deserve it.

It’s the geek show “can you fucking believe someone gave this trash film a Criterion-level restoration?” factor that makes releases like this worth checking out…assuming you don’t already own a copy of the earlier release, in which case you really have to weigh for yourself whether it’s worthy of an upgrade or not.

There’s a 9m interview with producer/director/writer Mardi Rustam where he claims Evils of the Night was inspired by The Day the Earth Stood Still (of all things), and they also include the 1:33:24 TV edit in a ratty, windowboxed VHS-sourced transfer.  For those interested, you can access an isolated score track and a few outtakes as well.

The bottom line here is, if you’ve never seen, much less own a copy of the film and you’re a fan of low rent oddball cult film (particularly fans of the more unusual corners of the slasher realm), this one’s really a no-brainer.