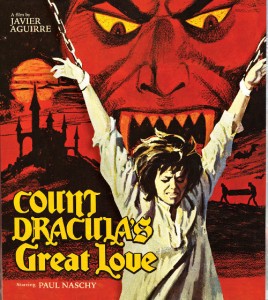 One of the oddest of releases in the gallery of Paul Naschy essentials, (Count) Dracula’s Great Love has always nestled among the more contentious corners of debate in fandom circles.

While quite familiar to viewers of a certain age range due to its AIP syndication package status, this film has always been something of an anomaly.

Neither one of the erstwhile Señor Molina’s much-feted Waldemar Daninsky werewolf efforts or his more interesting ventures into occult horror (Horror Rises from the Tomb, Vengeance of the Zombies, Exorcism, The Hanging Woman, Night of the Sorcerers) Neo-giallo (House of Psychotic Women, Human Beasts, Panic Beats) or even weird Eurocine takes on crime (Crimson), Dracula’s Great Love is an unusually slow moving (even by Spanish horror standards!) piece entirely dependent on atmospherics and sound (thus leaving the English dub track superior to these ears), and most importantly, at core…

Much has been made over the years about Naschy’s “short, stocky” weightlifter’s frame being somehow “inappropriate” for the role, and there is a grain of truth to the contention: the character has come to represent Decadence, and a healthy look would appear in contrast to that very concept.

But does Naschy deserve that slam? No, not really. His “Dr. Marlow” (aka Dracula himself) is respectable enough, and hardly works his way through athletic Daniskian maneuvers here. While perhaps a bit off kilter given decades of typecasting of the character (if you will), there’s really very little to latch onto here as the sort of “gotcha” moment so beloved of post-millennial internet film “critics”. In short, it’s no Miami Connection.

The film itself is a tad silly at times – that opening credit sequence with the guy rolling down the stairs over and over with an axe in his head gave many a belly laugh since first seeing the film on syndicated television many a year agone, and the romance angle is somewhat strained – Naschy effectively turns the character into Daninsky lite, with all the “tortured romanticism” and emo-ness that implies. Lugosi and Lee would never have taken it laying down. Jourdan and Langella, for all their more ladies romance novel leanings, were far more feral and yes, dangerous.

But even so. Those accustomed to Spanish horror in general and Naschy’s filmography in specific will find little to grouse about here, particularly in the nicely remastered, option-heavy version provided herein.

BCI had previously released this one (as “Cemetery Girls”) alongside Cirio Santiago’s Vampire Hookers (previously released by Vinegar Syndrome in conjunction with the entertaining blaxploiter Death Force) in a 1:22:25 grainy, well used print with running lines and the dub track only.

Vinegar Syndrome provides a much cleaned up 1:23:34, whose vibrancy even shines in the difficult, somewhat grainy fog sequences. The colors are much improved, with more clarity, contrast and tone.

Better yet, viewers are offered the option of sticking with the familiar English dub or the original Spanish with subtitles, in addition to liner notes by Naschy devotee Mirek Lipinski, a subtitled Spanish commentary with Naschy himself and director Javier Aguirre and a positive toned interview with sexy vampiress Mirta Miller (Vengeance of the Zombies, Eyeball, Get Mean).

With such a nice restoration package given to a film that, by comparison, really didn’t demand it, one can only wait with bated breath to see if Vinegar Syndrome (or some other enterprising company willing to lavish even half the care shown here) will finally release Werewolf vs. the Yeti, a proper print of Fury of the Wolfman or the true, “unclothed” versions of other Naschy efforts previously released in the detestable Franco censor versions (aka “the diaphonous gown” versions).