After reviewing so many (admittedly quite entertaining, but objectively speaking) bad films, it’s always a bit jarring when an actual “good” one comes my way.

Now, you already know we’re not talking in terms of enjoyment, amusement and so forth – the sort of thing cinema was designed to do.  Shock, amuse, entertain…provide a fantasy world and outlet to escape from the everyday struggles we all (or all but a fortunate few with the financial wherewithal to not have to subject themselves to shit employers and the company of idiots for their keep) are forced to face for the better part of our mortal lives.

But rather, we’re speaking of “good” in more objective terms.  Critical appreciation.  The celebration of unarguable (or at least more broadly accepted standards of) merit in performance, aesthetics, scripting, dialogue, cinematography and direction.  And it is here, under these more commonly accepted markers of evaluation, where Paul Aratow’s China Girl surprisingly excels. 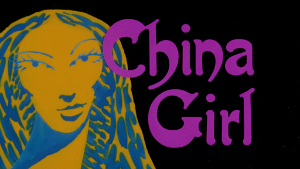 Directed by a man whose sparse credits more or less revolve around working camera on Alex DeRenzy‘s Weed and Al Adamson’s likeable if jumbled splicefest Doctor Dracula, there’s really no reason for the film to come off as well as it does.  But dammit, if you’re aching for the next Radley Metzger or Anthony Spinelli, well, this one’s for you, brother.

With a cheesy Eurospy film conceit, mainstream actor (and all purpose Asian perennial baddie) James Hong in tow and bearing a decidedly measured pace, this feels less of a hardcore film of its era than a mainstream (or more precisely, higher end genre film) production.

Factor in some truly excellent cinematography at points (check out that opening scene on the docks!), good aesthetics and an actual plot (however threadbare and silly), then tag in strong performances by several of the folks involved and a shockingly tasteful if not classy jazz score (which enhances the film’s noir aesthetic by multiples of ten), and you have a film that really stands out among its kind.

Among mainstream films of its era, hmm…it may not exactly hold its own.  Maybe it’s arguable, as many of the markers are there – spy business, a little romance, the whole 9 yards.

But among hardcore films?  We’re back to talking “Henry Paris” and Spinelli…that’s about it in this league.

That said…the film’s a gyp.

You see a film titled China Girl.  There’s a poster (or two, both of which come on the reversible cover here) pushing the “Asian exotica” angle.

And all it really is, is an Annette Haven vehicle.

Now, it’s no secret that I dig redheads, and always appreciate Haven’s presence in a film – just dig back through the reviews, it’s there in black and white.  And yeah, gatemouth teeth and plucked eyebrows aside, she’s pretty smokin’ here as well.

But where the fuck are the Asian girls?

Yeah, there’s Pamela Yen, who’s part of the evil spy cartel Dragon (who torture through pleasure and use RNA to steal memories of prominent politicos and such and sell ’em to rival governments) and who briefly falls for Haven’s sheer insatiability…er…”charms“).

And there’s that odd looking Malay girl (billed as “Susie Song Li”…yeah, right) who does that horrible strip bar routine.  But neither of ’em gets physical, and they’re barely onscreen, even.  James Hong gets just as much time as Yen, “Li” gets all of 4 minutes.

That aside, as previously noted, this is a damn good looking, quality projecting production of its type, and if you walk in knowing it’s one big Haven fest with light “Asian” garnish just to spruce things up and make ’em feel all “kinda exotic, kinda-like”, then, yeah, this one’s definitely worth looking into.

sorry, no Asian girls tonight. We have redhead, though.