While I confess I don’t entirely share my teenaged self’s infatuation with her, I used to loooooove Stacey Donovan.

Ever since catching her in one of my father’s rentals (The Ultimate O, which costarred Paul Thomas and a disembodied hand shaking a bible at her while she was on the toilet for at least 5 minutes of the opening), she was one of my unsung faves, not trailing unduly far behind Ginger Lynn.

So it was nice to start the cheesy late 70’s-style SF credits and see her top billed, alongside Amber Lynn and…er…Tracey Adams?  Well, whatever…while I may not see things the same as I did back when, you have to admit…she ain’t bad.

This one’s set in a near future where street corners are worked by “Nightdroids”, or as explicitly stated, “Android Hookers”. Yeah, you know exactly which much beloved cyberpunk film is being riffed on here…and I don’t mean Cherry 2000, either. 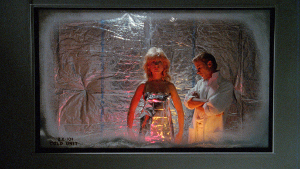 But you can tell things aren’t about to get overly William Gibson when you discover the entire film is to be set in a sparsely decorated, billowing curtained “pleasure maze”, and the only lines you hear for some time are:

Yeah, you can tell this one’s gonna be high art…

Well, anyway, Tracey Adams, who’s kinda cute if a bit unspectacular (there were hundreds just like her – and better looking at that! – on the 80’s metal scene) boffs a silvering Joey Silvera, who tells us he’s “the oldest living tester” as he jogs down some abandoned railroad tracks (quite scenic, that). Nina Hartley, looking a whole hell of a lot hotter than she was at the area strip bar we saw her at only a few years after this film, gets with both Don Fernando and some skinny rat faced dude.

Things get a bit Sex World, with Joanna Storm as a doctor (scientist? Who the hell knows…) monitoring all the “testing”, as Billy Dee gets with a pair of blondes, one of whom is Pretty Lili Marlene (the other one with the butch haircut really seems to be enjoying herself, which was a nice change).

Donovan finally shows up to bang industry pariah Jerry Butler (whose autobiography Raw Talent is an amusing must-read), Butler and Silvera engage in some locker room chat about the latter wanting to retire and Amber Lynn gets to wear a goofy-ass shower cap as a fashion accessory while she diddles herself.

Storm gets busy with Amber’s real world brother Buck Adams, but only after she has a sapphic fling with Nina Hartley first. Finally Silvera gets his final test: the new “Delta model” (Amber Lynn). There’s a cheap gag “gotcha”, Playboy cartoon style, and roll credits.

Actually, we can revise an earlier statement: one thing that makes Pleasure Maze a bit unusual is that several of the ladies actually seem to be enjoying themselves…which is decidedly, if sadly, an exception to the rule when it comes to these. Better yet, even those you probably stifle a yawn at seeing from so many fair to middling filmic appearances otherwise…look pretty damn good here.

Was 1986 just a golden year for hot blondes?

Or does it come down to the pseudonymous direction and cinematography of “Duck Dumont” and “Guido”, respectively?

Hard to say, in all objectivity, though it’s apparent that the duo has a definite flair for filming in the interests of prurience.  Bottom line? This one’s pretty damn hot, and this coming from a guy who hasn’t seriously ogled a blonde for many a year.

From the same year comes another pairing of the director and cinematographer (not to mention about half of the same cast), namely Lovers Lane.

After an opener boffing Joey Silvera, Tracey Adams gets a call (after 5 years!) from “Lovers Lane Rhonda”, who, like Abigail Leslie, is back in town.

After a horrible rendition of “do ya wanna dance?” by Mr. Nassivera, a series of flashbacks ensue, where the aforementioned (Barbara Dare) boffs Buck Adams and Don Fernando on an obvious soundstage floor (which is supposed to be an outdoors “parking spot” for amorous teens).  Dare is annoying as shit, faking every second the girls in Pleasure Maze appeared to be offering for real, so it’s a pleasure when the peeping cop finally breaks it up!

Tracey and Barbara start a regular phone relationship, reminiscing about such nonsense as “the time Lulu (Stacey Donovan) went up on lovers lane with that guy in the shades”…the latter being some ugly Sammy Hagar type with mild steroid pecs turning to flab (some doofus named Jonathan Lee). Donovan seems to be enjoying herself…which makes her one of the few in this particular film to do so!*

* at least when she’s running the show. It devolves into some Barbara Dare-level faking it towards the end… 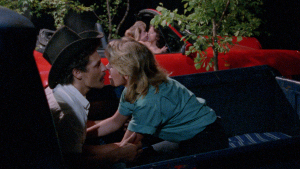 Now Tracey visits the girl with the butch haircut from Pleasure Maze to try on on tacky matching satin outfits (somewhere between bad sleepwear and bowling league shirts), but they’re still reminiscing about all the if this van’s a-rockin’ don’t come a-knockin’ nonsense of their youthful acquaintances – this time involving a homely yuppie blonde and Billy Dee in a cowboy hat in the back of a pickup and Melissa Melendez getting with another, only slightly better looking blonde (but one with nice taste in lingerie) in the next car. How the gossip girls were there to see all these illicit liaisons is beyond anyone, but at least Melendez has a nice ass… 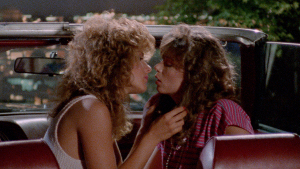 Finally, it comes out that Tracey and Barbara had a fling of their own up there, which through a bit of blackmail winds up as a three way with Officer Peeping Tom…who turns out to be a very gravid Dare’s husband. Oh, those matching outfits were in fact bowling shirts, and everyone (including Donovan and the happy couple) go out to bowl a few strings. Roll credits.

Damn, what a change! After the surprisingly enticing appetizer that was Pleasure Maze, Lovers Lane proves to be the kind of overcooked, underflavored meal that demands to be sent back to the chef.  Damn, there was just nothing good about this one outside half of a Stacey Donovan scene!  Give me a burger instead…

Either way, both films look stunning, with enough vibrancy that you can easily suss out shite sets (like the awful matte painting at lovers lane) and all those dayglo 80’s fashions (some rather nice…some perfectly hideous, like the bowling shirts).

And like the second feature or lump it, Pleasure Maze is well worth your time, particularly if you ever had a thing for really any of the ladies who take part therein…all looking (and coming off at) simply their career best.