Marked by an uber simplistic plot vaguely drawing from the then-recent success/infamy of Wes Craven’s Last House on the Left, Trip with the Teacher marries that film’s basic conceit with that of the biker film to mixed, if seldom less than interesting result.

A trio of (supposed) high school girls and their teacher take a bus trip into the middle of nowhere, as a field trip relating to their study of Native American culture. Of course, their bus breaks down and they run afoul of a trio of hippie biker types, one of whom (Red Shoe Diaries’ Zalman King) is a giggling, Krug-style certifiable psychopath. 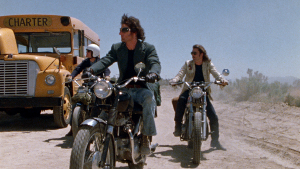 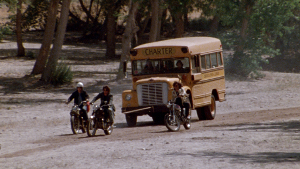 With a useless doofus of a bus driver as their only source of “protection” (however short lived) and under the guise of offering assistance (they literally use their hogs to tow the bus off to an abandoned cabin) the four women quickly find themselves at the mercy of the trio of ne’er do wells, and things go from bad to much, much worse.

This is the only directorial credit for Earl Barton, and exactly half of his production credits (the other being the mid-60’s singer/celeb Edie Adams’ short lived television series Here’s Edie!) – Barton was better known for his roles in Rock Around the Clock and (of all things) Seven Brides for Seven Brothers (!) – all of which are quite a ways from the uncomfortable grindhouse exploitation fodder of this film. 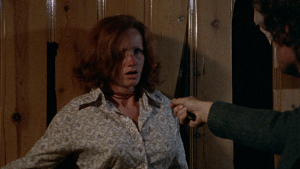 Aside from King, the most notable cast member here is Robert Gribbin, who’d continue to increase his exploitation marquee status with the hilariously absurd Hitchhike to Hell (whose theme song must be heard to be believed) and the slasher/sci-fi weirdie Don’t Go Near the Park. 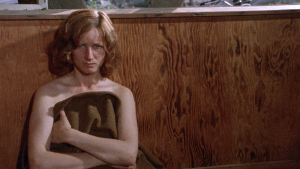 Fogarty also got herself bit parts in blaxploiter The Candy Tangerine Man, one of the Happy Hooker films (Goes to Washington), Aussie sexploiter Fantasm Comes Again and the early career Linnea Quigley film Summer Camp…the rest more or less dropped out of cinema after this (though Worthington would go on to multiple guest roles on various TV shows (inclusive of Dallas and Vega$).

Extras consist of a commentary track with Barton, Worthington and Ousley for those so inclined, and an onscreen chat with Fogarty (14:29), where she admits to having actually been a teacher before winding up as a Vegas showgirl and finally stumbling in to a casting cattle call, where she got her role here.

Trip with the Teacher was released twice previously to DVD by BCI Eclipse, first paired with Malibu High and later when both films became part of the first Drive-In Cult Classics collection – this is its blu-ray debut. While I didn’t have easy access to the earlier releases, a very basic online search shows a muddier, more obviously damaged print.

If that source is to be believed, Vinegar Syndrome offers a greater color contrast and (comparative) vibrancy, as well as a beefed up sound mix…though this print still bears its fair share of grain and softness, not to mention a bit of a hollow sound in relation to dialogue. Even so, it is a definite improvement from what I dug up online – take that as you will.