And another batch to close out Samhain week, happy new year to all! Hope you consigned whatever holds you back to the flames, and are prepared to tackle whatever comes your way.

This one was a bit odd…

One half hour long track, a slow moving suite of sorts that kicks off with a good five minutes of nigh-ambient Enya meets Loreena McKennitt solo voiced folk ululations with even more subtle keyboards beneath.

Then there’s some foley work of crashing waves, which at around the 10 minute mark builds to an awkward thumpa-thumpa blastbeat and bass drum pattern with Thousand Swords-thin guitars and occasional reverb-swathed shriek-barks. Is this Portuguese black metal, by any chance?

Next things get sort of Tangerine Dream by way of underground black metal for a minute or two, then back to the crashing waves and Loreena once again. umm…sure!

Well, that midsection worked well enough, despite the seriously juvenile drumming, and its atmospheric feel is complemented by the ocean noises…the rest, umm, yeah, whatever.

Swampbeast…wow, is that just a bunch of “developmentally disabled” children sneaking into a nearby studio and bashing around, making random, barely this side of atonal noise just for the fuck of it?

Seriously, this is pretty bad…don’t expect proper death metal by any standards.

Void Terror, on the other hand, deliver a meaty doom/sludge variant of the usual underground black/death thing, with straight from the intestines vox, overly detuned guitars and lots of reverb.

At least it comes off well produced and seriously heavy, rather than just noisy and amateurish…newcomers to this sound and scene could be forgiven for mistaking these guys for some Incantation tribute act rather than the same ol, same ol.

Better than their peers, I guess…and unquestionably run rings around their splitmates here.

Check out the Void Terror tracks and just step away from the crime scene, slowly. 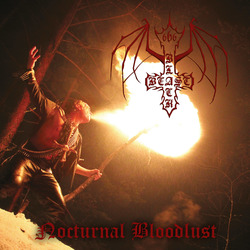 Apparently these guys were poking around in the early millenium, then packed it in…this represents their first full length, after more than a decade’s remove.

It’s all a bit one note, bearing some commonality with the more expressive Norsecore acts (Tsjuder, Urgehal, Marduk) in that every track sounds a hell of a lot like those surrounding…and yet. There’s a strong melodicism and almost anthemic feel when they finally pause for a riff change or chorus that saves ’em, bringing classics like Desert Northern Hell very much to mind.

Is this deep stuff, sure to become a pinnacle and touchpoint of the genre for the ages? Pfft. Hell, no!

But is this one of the stronger black metal releases we’ve heard in recent months?

Oh, yeah. Definitely killer, particularly if you bear the same affection for vintage Tsjuder as yours truly does.

Oy, more of this “occult black metal” nonsense, this time out of Chile.

What…well, it certainly doesn’t save this by any measure, but let’s say enlivens and amuses amidst all the po-faced flibberty-gibbet is the goofy ass Cookie Monster by way of Lee Dorrian crossed with Tom G. Warrior and Kim Fowley vocals.

Over sing songy Dark Funeralesque transpose one whole tone up and down seesaw riffs, yet.

Seriously, this is some silly shit.

And thrown together with aren’t we eeeevil crap like this sub-subgenre is known for? It’s positively hilarious, blowing unintentional holes in every hint of “unrelenting grimness” and the unspoken yet quite obvious “dammit, take us seriously!” assertions underpinning the whole affair.

It’s not ineptly played or produced enough to condemn to the flames, when there are so many more deserving…besides, it made me laugh.

But that don’t mean it doesn’t suck some serious ass. 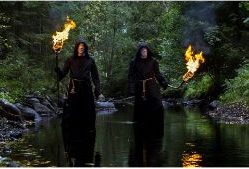 Wow, I certainly wasn’t expecting this…

Okay, let’s get the bad part out of the way first. The vocals are almost as silly as Xul Ov Kulten.

…well, fine, not anywhere near that level of comedy…but they’re in the same ballpark of sheer absurdity and incongruity with the music they’re appended to. Pretty silly when they’re presumably meant to be taken seriously, I’m calling that a major fail.

What you get here is some of the most expressive, introspective to depressive, almost shoegazey midtempo black metal you’re likely to hear…and it only gets better when it goes full on Finnish melodic on tracks like “reverence”.

Sure, you could say this is what you’d get if you crossed a Sepulchral act with Vardan and Alcest, then exposed ’em to as much Azazel as Catherine Wheel, as much Satanic Warmaster and Clandestine Blaze as Lush and My Bloody Valentine.

But even with the silly vocals…and honestly, are you even noticing them that much at this point? This one’s pretty fucking amazing, actually.

Did I say Black Beast was the best black metal I’ve heard in a bit? Because they just got one upped, with gusto.

Definitely looking forward to hearing more from these guys. 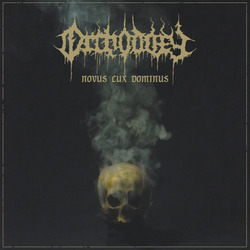 Spanish blackened death metal, with a bit more emphasis to the death metal side. Even so, expect a very “underground black/death” vibe, with overly detuned guitars, a sludgy feel and a whole hell of a lot of reverb on the belch vox.

The stench of Incantation hangs heavy over this one and the riffs feel both more “evil” than standard for death metal proper and more sluggish than most not falling under the doom/death moniker (tag in a bit of Acheron to get the general idea), but the lyrics, while attempting to hit the same oh-so-satanic and blasphemous ooga booga target, come off a hell of a lot more simplistic and generic, which is in a way a good thing…

About the weirdest thing here is that you can hear hints of proper production here and there, all of which go right out the window when those crappy sounding detuned guitar tones kick in again and our man on the microphone cracks out yet another drooling belch filled echofest of lyrical nonsense. So…you could have sounded crystal clear and powerful, but chose to sound this crappy?

Well, it’s certainly heavy, doomy-crusty and closer to the likes of Incantation than a lot of bands arguably attempting to broach the same sonic wasteland…and the music’s pretty basic and straightforward for blackened-style death metal, which is a definite plus.

No, not in my top tier of go-tos…but I was pretty comfortable with this, definitely. 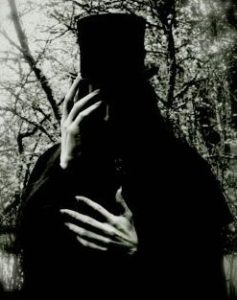 A track like “vampirismus” leaves you thinking someone just got home from a Gloomy Grim show and decided to give their own impresson of the quirky corpsepainted symphonic Finns. Possibly a show with Aura Noir as the opening act, given some of the weird vox on “carnival of the undead”…

Seriously, if you took the low budget claustrophobic approach to keyboard driven black symphonic of “Agathon” and company and the sprechtgesangish vocal snarls of “Agressor” and “Apollyon”, this is what you’d wind up with.

While I can’t claim to be overly excited by the end result herein, these are far from bad acts to be referencing and drawing from sonically. 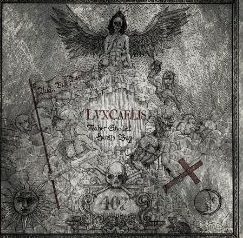 Seems incongrous to note in print, but sure enough…that’s exactly what these guys are laying down.

If I had to pinpoint one decidedly close analogue, I’d say these guys draw most from Urgehal, particularly when they really hit the sweet spot on tracks like “awakening the final chaos”, “fading into golgotha” or “kiss the skull” (whose more dramatic midsection pulls things into slightly more of a Tsjuderesque direction).

Honestly surprised to find so many positive reviews for the black metal end of the review spectrum of late…every time you think the scene, sound and aesthetic are surely dead and buried, with glory days long since passed…the damn thing rears its ugly/beautiful head again to torment/excite diehards who are eternally sure it’s seen its day.

If you dig the darker end of the Norsecore spectrum, you’ll certainly want to give this an ear. 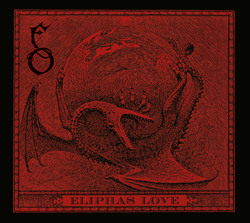 From the church organ to the sinister snarled chanting and little neoclassical Cradle of Filthlike sections that break up tracks like “vuoto mistico”, it’s perfectly obvious this is Italian black metal.

I mean, you can pick up moments that suggest Mortuary Drape, certainly Abhor Others speak to early Paul Chain, when he was still working more of a Death SS aesthetic and hadn’t gone religious/full on doom yet. Hell, there’s even a touch of The Black and the pre-Sonya Scarlet iteration of Theatres des Vampires to all of this…it’s like someone sat there and said “let’s make an ITALIAN black metal band, fuck the rest of the world!”

As you notice from all of the aforementioned and even the obvious superiority of early Bulldozer to their later work, Italy’s all about first wave and varying degrees of inclination towards doom…so despite a certain atmosphere being retained, all those faster moments herein don’t really cut it.

Ay, an’ there’s the rub: Funeral Oration seems to have a real hard on for blazing black metal speed…something the Italian scene is not known for, and which all this eerie first wavelike atmosphere is in fact disinclined to support.

Slower, darker moments are dead on. It’s just unfortunate that the band hasn’t figured out their own strengths and flaws yet…and hence have a tendency to emphasize the inverse.

Here’s hoping they get the clue – Ash was (with one exception) Paul Chain’s absolute worst album, and IX and Neurodeleri did Bulldozer no favors.

The Ember, The Ash – Consciousness Torn From The Void (Avantgarde Music) (September 13)

Of course, another prominent strain of Italian black metal is or borders on the oft maligned DSBM subgenre. Now, occasional (earlier) Shining can certainly set a mood, and Vardan has been an old favorite around these pages…but bands like Forgotten Tomb? Yeah, I don’t think so.

Thankfully, this one man band leans a bit more towards the Vond/Shining end of the spectrum, with plenty of dark keyboard work, sad arpeggiated minor riffs on guitar and tolling funeral bells beneath all the snarling and puking, so it’s not unlistenable…in fact, if you dig the first few Shining records, you’ll probably feel like it’s old home week.

But is this the sort of pensive, introspective sound yours truly tends to sidle up to?

Shrug of the shoulders, in the end. Heard so much better…but on the flipside, give it a spin, and you’ll have to admit: you’ve certainly heard much worse.

Negura Bunget, whose Tau got a middling review from us several years back, returns from a breakup and hiatus to deliver something a bit more deliberate, less bombastic and doom oriented.

It’s still quite obviously the same guys and playing in a similar ballpark…just expect things to be slower, gloomier and perhaps a tad more pagan in feel this time around.

If you were big on their earlier incarnation, you should probably find plenty of familiarity and comfort zone herein…in some ways, I preferred the more lumbering feel here, but don’t expect to find anything particularly anthemic, bombastic or moving in that sense.