Another pleasant discovery came to my attention recently: VCI’s release of an eerie frostbitten film from 1971, the Night Visitor.

The poster artwork ballyhoo (a striking Spanish poster for the film is combined with contemporary critical taglines from the more drab if surreal domestic version for the DVD cover) quotes a review which states that “if your flesh doesn’t crawl, it’s on too tight”, but this is patently absurd – there’s nothing remotely frightening about the film.  What it does have is a chilling wintry atmosphere and a strong sense of claustrophobia – in spades.

END_OF_DOCUMENT_TOKEN_TO_BE_REPLACED 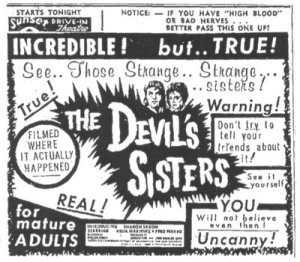 In this day and age, there are few surprises. We live in a post-cult and underground world, where even what is considered mainstream never fails to acknowledge, crib from, or rip off outright what was once obscuritana, known only to the hip, the scenester, and those who actually produced the films and music under consideration. While the current iterations cannot fail but to be pale imitations of their more creative and vibrant forbears, the knowledge and awareness of what once was hidden in shadows and discussed in secret corners is undisputedly a matter of public discourse, at least among those who create, review, and are themselves part and parcel of the art form.

END_OF_DOCUMENT_TOKEN_TO_BE_REPLACED

Watching Battle Royale for the first time in nearly a decade, and am struck, having just seen both, just how sorry and pathetic a xerox The Hunger Games really is of this film.

Excellent acting, true pathos, a real sense of attachment and emotional involvement with every single one of a 30+ character cast, most of whom were, I believe, younger than those in the US bastardization. Kinji Fukusaku shows what a real director can do with this sort of material: proper camerawork and framing (none of this nauseous shakycam, quick cutaway and overreliance on greenscreen and CG crutches), a much better script, and a more intelligent, far less blunt take on a very similar politicosocial message.

…Further, this wasn’t dumbed down and made “safe” for a pampered YA audience looking for the next emo “hottie” Twilight wannabe – killing is as brutal and disturbing as it would be in the real world (though not overdone, this isn’t a Tom Savini job).

And best of all? The message is realistic. Trust no one, at least not fully. While both recognize where things are headed, with the old and rich eating the young and poor and exploiting them to their own ends (and in both political and entertainment arenas), Suzanne Collins’ silly little lovechild would have us believe that romance and trust will save the day, and that there are no TRUE “baddies”, even in a 1%er dystopia. Even the bad guys are given a backstory, some ambiguity, a rationale, as if they’re just as well meaning as the rest of us. The real world is already showing us quite different.

You want the real version? Skip the weird looking girl and ignore your teenage daughter’s squeals of delight, and check out Battle Royale.
END_OF_DOCUMENT_TOKEN_TO_BE_REPLACED