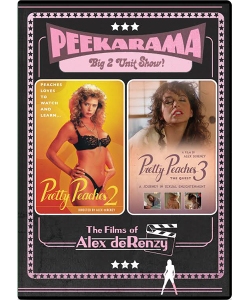 Vinegar Syndrome makes a break with the heyday of adult film by offering two late 80’s offerings from director Alex deRenzy.  And boy, is it a change.

So to walk into two films from the latter end of the decade after so long a remove is quite a shock.  The variances between offerings from this particular time period forward and anything whatsoever that came before are markedly pronounced, and not in a good way. 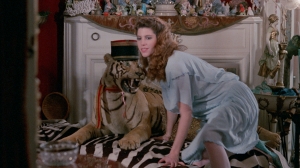 Now, before we get any deeper into this, be mindful that Pretty Peaches 2 and 3 are very much the 80’s variant of the adult film industry, complete with big hair, generally worse acting and landing strip-sculpted bush (often poorly dyed to match the bottled hair color du jour).

That said, at least Peaches 2 (hailing from that linchpin year 1987, essentially the end of the decade as we knew it thanks to the dramatic stock market crash that October) more or less manages to fall outside of what would become standard and par for the course, neither shot on video or wholly plotless and slapdash as so many efforts from the latter half of the decade would prove to be.  And despite the dawn of a sea change in personal grooming poking its ugly head in the door, at least this first film on the disc still appears to fall before the dawn of plastic surgery disaster boob jobs and surgically altered visages… 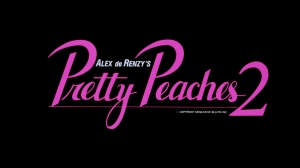 Pretty Peaches 2 opens up with ‘Mr. Sure Shot’ Peter North, perhaps the single most ubiquitous male actor of the decade.  Pete’s the eager (for) beaver boyfriend of bubbleheaded (and tongue-in-cheek monikered) “Peaches” (Siobhan Hunter).  Hunter proves something of an unfortunate choice as a lead, given her propensity towards delivering her entire sides in a whiny, none too intelligent pout that comes off more truck stop waitress than youthful ingenue.  At least she’s got a rather hot body… 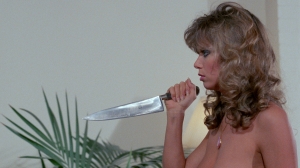 slasher film homage? Nope, just mom trying to get her little girl’s BF to boff her.

When Peaches’ mother (Tracey Adams) chases North away mid-coitus, rather than leaving in frustration, he winds up spying on the supposedly older woman undressing.  After a bizarre bit of coercion and intimidation on her part, he gets to alleviate his frustrations with mother in place of daughter… 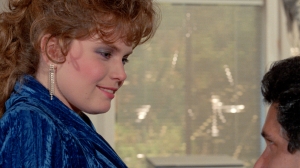 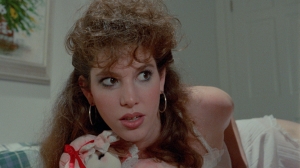 “Golly, I’m sure glad I had that talk with Daddy.  He gave me some great advice. I know I’m never gonna be a tease.

So how am I gonna start my sex education?  I know, I’ll go visit Uncle Howard in San Francisco!  He’s told me so many times that I could come up there and visit him, and he told me that I’d have a great time!

Oh, I’d better leave a note for mom.  I’ll tell her the good advice that dad gave me: ‘never play hard to get’, so she won’t worry.” 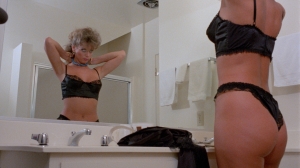 There are some positives to this being an 80’s production: tricolor eyeshadow, hair clips and some dazzling outfits (check out that silver number Adams is wearing when she goes to see Herschell, who’s decked out in a slick Italian silk suit). 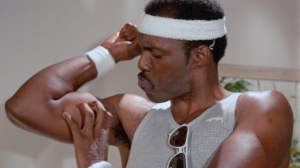 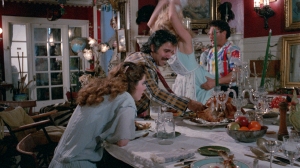 Famed autofellator Ron Jeremy is on hand as Uncle Howard, and this time around, he’s a cross between Looney Skip Rooney and Clarabell the clown.  He’s got a weird son right out of Revenge of the Nerds (Billy Dee) and a Shannon Tweed wannabe for a wife (Ashley Welles), and there’s some unsavory relations going on between the three of them which Peaches and the viewer get to sit in on. 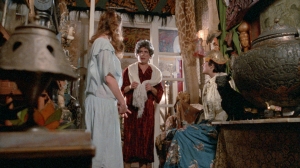 Another resident of this madhouse is Jamie Gillis in Mrs. Doubtfire drag as ‘Granny’.  Of course, he tips his hand and gives Peaches the adult education she’s been asking for (paging Hall & Oates!).  There’s one more personage in the house, who dresses in traditional Balinese costumerie (“Crystal”, essayed by cute Melissa Melendez).  Amusingly, she’s supposed to be Chinese, despite being as obviously white (well, OK, Latina) as they come…oh, well, at least she’s cute!

It sort of blows holes in the entire conceit of the film when we finally get to see Peaches going at it, as all ports appear to be quite expansive and well traveled harbors…yeah, I believe it’s her first time…

At least Adams has some fetching 80’s fashion sense as mentioned earlier, and Ron’s place, while far too overcrowded, has some outstanding aesthetic points to be found among the clutter – smoked mirrors, ornately carved oriental furnishings, French style paintings and frames, exotic lamps, tribal masks and more.

Eventually, our imaginary Oriental drags Peaches to a “Chinatown” whorehouse, where Peaches gets it on with a stranger, the two girls do each other, and finally boyfriend Bobby (North) shows up to get what he missed out on at the outset of the film, all within about 10 minutes of screentime.  Sheesh, he could’ve gotten it for free, why pay for the privilege?

Bottom line: nothing particularly outstanding to be found here, unless you’re a fan of DeRenzy’s off kilter humor (which is not only firmly present, it’s positively all over the place) or need to see absolutely everything the many “name” actors and actresses involved starred in.  You could do much better, but then again, you could do worse. 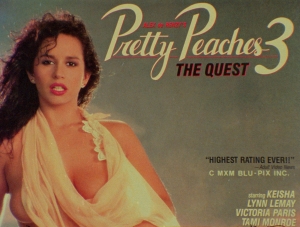 Simultaneously and astronomically more bizarre and crass than the earlier film, Pretty Peaches 3 goes straight into Dark Brothers level weirdness, without the barest nod to the pretense of a plot.  Well, unless you have a major grudge against the various religions and cults of the era, in which case, have at it.

While we get the same ‘mother’ (Tracey Adams again), Peaches this time around has mysteriously changed both ethnicity and cup size, the role now essayed by popular and busty 80’s Latina starlet Keisha. 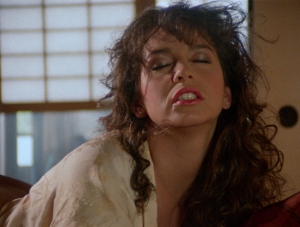 With barely a line of script or change in camera to set the stage, we go from Keisha and a school chum discussing sex and schoolwork directly into a surreal dream involving the (later blacklisted) Marc Wallice and another fella trying (and for the most part, failing) to break through or remove the pantyhose barrier to said schoolfriend’s naughty bits. 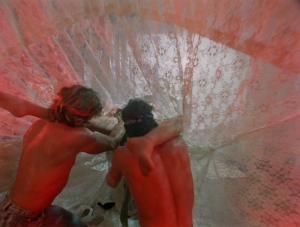 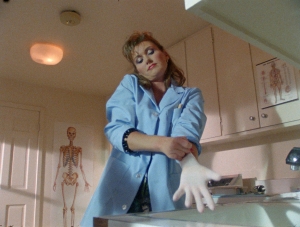 This gives an excuse for Jamie Gillis to deliver a surprisingly endless Jimmy Swaggartesque televangelist ad lib (complete with crying jag, good ol’ boy down home accent and incongruously huge Catholic monk’s cross(!).  At least there’s eye candy to keep the viewer distracted, in the form of petite Morgan Fairchild lookalike Victoria Paris, who makes the other slice of nice in an abortive sandwich of love between Peaches and the preachin’ pair.  Just to be sure things stay strange, this all takes place under helicopter induced wind turbulence and searchlights, when the FBI shows to crack down on the tax evading phonies. 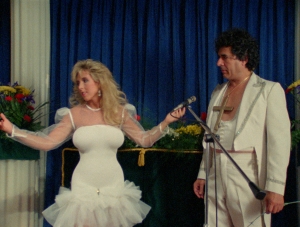 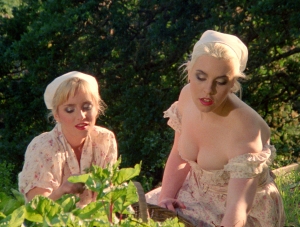 Peaches feathered haircut sporting boyfriend Bobby (this time essayed by a Gene Carerra, who looks a hell of a lot like Carl Crew of the Secret Life of Jeffrey Dahmer) encourages her mom to go looking for her erstwhile daughter, who by now has wound up with a crackpot EST style encounter group which includes earnest Latin lover Don Fernando.

Victoria Paris lookalike Tami Monroe is also among the members here, though her breast and shoulder tattoos work against her natural appeal somewhat more than the unadorned Paris…naturally, Peaches’ mom and boyfriend wind up hooking up mid-search, and Peaches’ journey runs her afoul of some seedier street people looking to procure, before it all winds to a sub-messianic ending. 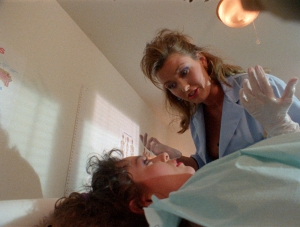 No longer was this the province of the slumming theatrical or misguidedly prospective mainstream film star, or the deliberate rebellion of the hippie types trying to promote the newfound gospel of sexual liberation the late 60’s and early 70’s (and more specifically, apparently consequence free love granted by the pill) had to offer, but money and drug habit-driven mercenaries and desperate street kid types with nothing to lose.  The difference in tone is blatant and obvious, and gives the offerings from this era forward a grim, joyless feel wholly absent from all but the most transgressive offerings of the decade and a half prior. 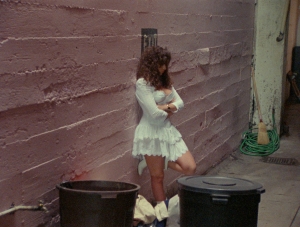 As such, it’s kind of hard to recommend these films.  To compare Pretty Peaches 2, much less Pretty Peaches 3 to the sort of fare we’ve been reviewing from the likes of Eric Edwards, a younger Gillis, Linda Wong and so forth (not to mention directors like Radley “Henry Paris” Metzger, Roberta Findlay and Anthony Spinelli) is like weighing gold against the contents of a dumpster.  Sure, some good stuff can be found in a dumpster dive, but for the most part, what you’re going to fish out is half eaten burgers, flat soda pop and used napkins.

While some lowered sense of aesthetics is still present and there are a cast of “names” both past and contemporary to be found herein, there’s not a lot to hold up in terms of appeal.  I guess if you dig ’em, you dig ’em, but you can’t even use the excuse that “you had to be there”, as these were the years I first discovered the genre.

But now that I think of it, even then, we tended to focus more on the early to mid-80s stuff than the far less appealing films of the late 80’s and early to mid 90’s…